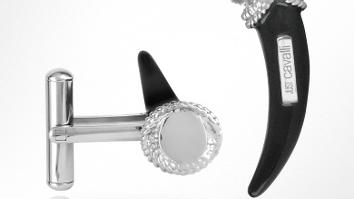 While Italy has been a predominantly Roman Catholic country for centuries it’s also a land that seems to breed some serious superstitions especially in the South. While overall religious belief seems to be waning in Italy, many still hold strong to the superstitious beliefs that have been passed down for generations. Along with these firmly held beliefs come the practises and symbols used to protect oneself, as well as homes and buildings, from bad luck or evil. One such belief is the concept of the Evil Eye (malocchio), one that’s not limited to Italy, but rather can be found in many cultures around the world.

Symbols used to ward off malocchio, bad luck and evil in general are often used and referenced in Italian culture and, by extension, its fashions and jewelry design. While in Italy the number 13 doesn’t hold the same negative connotations as it does in North America (it’s actually seen as good luck), a day like Friday the 13th always seems to bring up discussion of superstitions and bad luck on this side of the pond.

Common Italian superstitions include not putting a hat or new shoes on a bed or table, not toasting with water and never pouring wine with your left hand. Seventeen is the bad luck number in Italy and if you’re single don’t sit at the corner of the table if you ever hope to wed. Owls are bad luck and you shouldn’t keep peacock feathers in your home (something about the eye of the devil). Of course, one of the most pervasive superstitions has to do with the Evil Eye.

The idea of the Evil Eye or malocchio is one that has been found in many cultures stretching back to ancient times. In countries like Turkey, for example, you’ll find eye symbols over doorways and on jewelry to this day. In North America the horseshoe we now often associate with luck started off in England and Ireland as an amulet mean to signify strength and to protect people, homes and barns from evil. Jill Stefko writes:

“The existence of Malocchio, the Evil Eye, is ancient and there are references to it in records written by the Babylonians, Sumerians and Assyrians dating to approximately 3000 BCE, according to Rosemary Ellen Guiley, The Encyclopedia of Witches and Witchcraft (Checkmark Books, 1999). Ancient Egyptians used eye make up and lipstick as protection against it. The Bible references it in both Testaments. Ancient Hindus believed in it. The belief among people of Mediterranean and Central American countries still remains strong”.

The trick with the Italian concept of malocchio is that often times the person giving it may not even mean to. You don’t just have to worry about people consciously cursing you but those that, with just thoughts of jealousy or envy, pass it on. And its not just enemies that can give you the evil eye, rather the giver is often someone close to you who may be passing it on rather unwittingly. When a compliment is given–like saying a child is beautiful–many Italians will make the horn hand sign (mano cornuto — another ancient amulet) or touch iron (tocca ferro), which is the same concept as knocking on wood, as a way to reverse any malocchio or tempting of fate that may have occurred. While many people and regions likely have their own interpertations of malocchio there are actual rituals for getting rid of it and symptoms that can tell you if you have it, like sudden headaches or exhaustion.

Of course, many believe that one of the easiest ways to ensure you don’t get malocchio is to protect yourself with symbols or talismans. In Italy the most famous of these is the corno or cornetti (horn), which is an ancient symbol that predates Christianity. A wavy horn, the image is said to have originally been associated with the Moon Goddess and was most often produced in gold, silver or coral. Today a corno can also be purchased in wood or plastic. The corno not only protects against the Evil Eye, but is also said to be worn by men to ward against infertility. Parents often affix small horns on their helpless babies to protect against the Evil Eye that may be cast by well wishing visitors as well as envious strangers. A branch-like coral amulet is another version of this, often favored by young girls and women. The Italian horn has made its way to North America and is often seen in jewelry, keychains, tattoos and hanging from rear view mirrors. Some also believe that salt and amethyst ward off evil spirits. Other now-famous good luck symbols like four leaf clovers are other cultures answers to warding off the Evil Eye.

While corni are most often used to ward off the Evil Eye, many Italians and Catholics in general often use other means. Wooden bracelets depicting Saints and the Madonna have recently become very popular, and carrying medallions of certain saints (from Saints Benedict and Christopher to St. Jude) have also been used for years. For example, as St. Christopher is the patron saint of travellers many will keep a St. Christopher medallion in their cars. Rosaries and crosses are also used not only to aid in prayer and as a symbol of faith, but also as a means of protection of person or property.

These days the line between religion and superstition, fashion and trend have blurred. When Kristen Stewart appeared in Twilight wearing a wooden bracelet bearing the likeness of St. Jude the popularity of this type of jewelry soared. Celebrities like David Beckham have also been known to sport rosaries, and crosses are now available in countless incarnations from diamond-studded to inexpensive fashion jewelry. Not surprisingly Italian designers have also gotten in on the action.

Dolce and Gabbana are one Italian design firm well known for producing jewelry that bears both crosses and horns. Similarly, Roberto Cavalli’s line of jewelry–including necklaces and cuff links–feature the famous corni. If you’re not looking to hundreds on a designer piece there are now countless inexpensive versions of these types of jewelry and amulets available online or at stores like Forever 21.

Interested in learning more about Italian superstitions? Click on the link to read more about the subject.