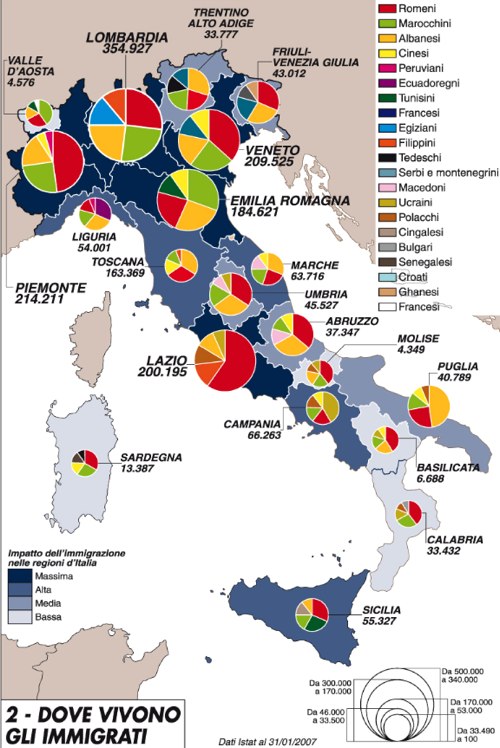 In the past few decades, things dramatically changed in Italy in terms of immigration and illegal entries. This issue, which until the 1980s seemed to be only a problem for the United States, rapidly and like an oil spill, hit the Italian coastline with violence.

It all started during the Cold War, with people escaping the tentacles of the Soviet block. The Polish arrived, waiting for a pass to America or to be legally admitted to Italy, and were a common sight at Italian crossroads, as they hoped to wash cars’ windshields while they stopped at traffic lights. This situation lasted a few years, then slowly the Polish were replaced by other ethnicity. Meanwhile, another group was finding its way in: North Africans. They started off by selling little jewelry items and t-shirts on beaches, and became very popular.

After this first significant, but fairly small wave, things got much more intense: many immigrants sought political and humanitarian asylum in Italy, but a dangerous mix of lax border controls and heavy political agendas meant the situation became quickly exasperated. Many immigrants remained in the country illegally and became involved in criminal activities such as prostitution and drug dealing. The problem was twofold: if the increase of foreign criminality created tension between ethnic minorities and we Italian, who are traditionally quite conservatives, the fact the country was (and is) not economically ready to help, rose tension esponentially.

Along with these people entering illegally, the international mafias and little gangs moved in, causing their own problems. Lastly, contributing to the mix of conflicting issues, Italy saw an upsurge in its need for manual and unskilled labor as Italians started to turn down humble jobs in favor of white collar positions.

The culture shock as people entered the country often created social frictions, especially when it came to religion. Some minority groups began to organize themselves with unions, asking for rights to practice their religion and to be treated equally. Many of these major changes were evident in education, as new generations of foreigners started to attend school, in many cases representing the majority in all classrooms. This created issues with traditional Italian customs such as ways of teaching history, decorating during the Christmas holidays, and more. In addition, the more organized and powerful groups triggered the jealousy of other, traditionally quieter groups.

The Chinese, for example, while rarely appearing in TV reports or in protests against the system, operate quietly and with incredible business sense, taking over entire sections of the cities and even some industries. A classic case of this is in Prato, Tuscany, where its multi-century textile industry is basically entirely run by the Chinese. Eastern Europeans, after joining into the EU, are now legally entitled to enter and exit at their leisure. This has been both good and bad: it helped many honest citizens to build a new life and integrate into Italian society, while others took the opportunity to increase their illegal activities and create serious, potentially dangerous social turmoil.

One group of immigrants presents significantly unique issues: the gypsies, most of Roma descent. A wave of anti-gypsy sentiment across Europe has entered Italy, stemming from a number of sources among which are the often aggressive attitude taken by the Roma across Italy, and simple racism. To make things worse, the gypsies often expect to be treated by their own rules which are not the same as Italian codes of behavior, rules, and laws.

The process of globalization and the sudden and rapid expansion of the EU has brought and continues to bring major social changes to many areas, and there is no doubt that richer countries must accommodate the needs of the poorest. The danger lies in not realizing, as Italians, that we need to invest time and effort into helping other countries grow into full and independent economies. But it also lies in the incapability of certain minorities, or better, part of certain minorities, to understand that the culture, the religion and the heritage of their new country need to be respected and known. If we all, hosts and immigrants, ignore this necessity, the world could potentially become a social bomb awaiting a spark. Common spaces are getting smaller and smaller, and the tensions caused by centuries of difference are starting to explode.