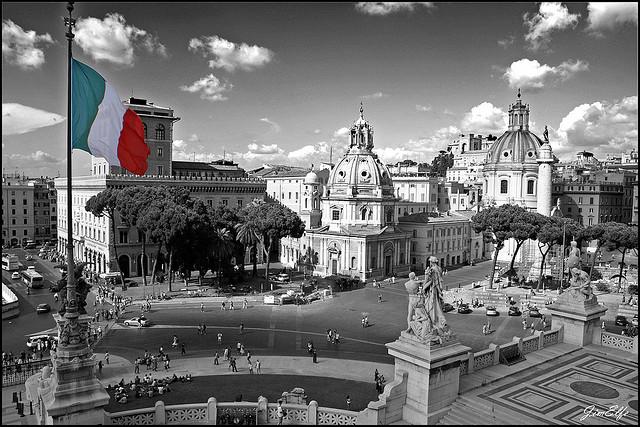 If you follow the Italian news you are certainly familiar with Mafia Capitale.

Even for a country used to scandals and corruption as much as Italy is, Mafia Capitale proved to be an issue of almost unconceivable proportions, with ramifications running deep into the socio-political fabric of Rome. After more than twelve months of investigation that lead to several arrests, also within the political and mediatic world of the capital, the “processo a Mafia Capitale,” Mafia Capitale’s trials, have started last week.

You can follow the evolution of the trial, day in-day out, on international tv news, newspapers and on our site, of course. But what is exactly Mafia Capitale and who is involved in it? Where did it all start from?

We’ll offer you a short, yet clear overview of what Rome’s Mondo di Mezzo – the Middle World: so is this branch of Roman organized crime known by – is, how it came to be and why it shocked the country to its very core.

What is Mafia Capitale?

In June 2014, an investigation led by Italy’s Carabinieri discovered a thick network of relationships among the world of criminality and those of sports, politics and entertainment. Mafia Capitale is, and has to be considered, a criminal organization with a mafia-like structure, operating in many sectors of Rome’s public life. Its tentacles reached the worlds of business, building contracts and even migrants reception in the capital, as well as some areas of Lazio.

Mafia Capitale came to the attention of the country for the first time after the arrest of Giovanni de Carlo, considered by many the leader of the organization, in charge of coordinating all of its illegal interests and operations. The real mind behind it all, however, was that of Massimo Carminati. In the 1970s Carminati, who was arrested last December by Carabinieri’s ROS (Raggruppamento Operativo Speciale, special operative group) in a well known action, had been associated to extreme right terrorist group NAR. Carminati was also a member of the infamous Banda della Magliana, which lead Rome’s organized crime in the 1970s and 1980s. If you ever read the book “Romanzo Criminale,” you are familiar with both la Banda della Magliana (to the story of which the novel refers) and to Carminati, whose figure offered the inspiration to the character of “Il Nero.”

Among those investigated of “associazione mafiosa” along with Carminati is also former city of Rome mayor Gianni Alemanno.

The video of Massimo Carminati’s arrest, on the 4th of December 2014.

That a lot was wrong with our beautiful capital it was plain to see for residents and tourists alike, but no one could imagine the extent of it all.

From a mediatic point of view, Mafia Capitale became immediately a hot topic: the names of those investigated included, as we said, former terrorists and Rome mayors. If that was not enough, it soon became apparent the world of showbusiness and sports were also involved in the affair.

Wiretapping of De Carlo’s phones allowed Carabinieri to discover a hot list of footballers, singers and starlets, all on the Mafia Capitale’s boss speed up dialing.

De Carlo offered a sort of protection service for Rome’s VIPs, who seemed to trust him better than the police. Daniele De Rossi, soccer star of AS Roma and the Italian national squad, rang De Carlo after a fight in a nightclub; this week’s trial sessions have mentioned a bodyguarding service provided by De Carlo and his people to Francesco Totti‘s children, after rumours about a possible kidnapping had surfaced.

Teo Mammuccari, comedian and tv personality, was in friendly terms with him, to whom he would “ask advice” about “muscle building substances” to use while going to the gym, as De Carlo used to be a boxeur. Gigi D’Alessio, Italy’s own neo-melodic demi god, supposedly asked him for help when his roman villa was burglared and Belen (Italy’s favorite starlet) and her husband Stefano de Martino were, always according to Carabinieri’s wiretapping, among his acquaintaces.

What is really worrying, however, are the ties between Mafia Capitale and the world of Italian politics. Not unknown to the unfortunate connection between organized crime and politics, Italy remained nevertheless speechless to the extent of the connivance between the two in the Mafia Capitale case. A huge chunk of the Comune di Roma‘s building contracts were assigned illegally to companies related to De Carlo and his people. Investigations continued and names began to surface: Micaela Campana, Enrico Gasparra and, most notably, former Rome’s mayor Gianni Alemanno were among the names appearing more often in the tapped conversations recorded by ROS.

Majestic, millenial Rome has been hit by a devastating plague: this is a fact no one feels any longer to deny. If Mafia Capitale wasn’t enough to undermine the stability and well being of the Eternal City, Ignazio Marino, Rome’s former mayor who resigned in recent weeks, has done the rest. According to his detractors, Marino has done very little –if anything– to protect the city from neglect and criminality and has been considered by many citizens one of the reasons behind the unbelievable level of degradation reached by the city. The beginning of the end for Marino came when, during the Summer, he failed to return from his Caribbean holidays when the Mafia Capitale scandal took over the city.

Just a handful of weeks later, he shocked Romans and Italians alike by travelling once more to the US to take part to the Pope’s visit in Philadelphia. When criticized, Marino was quick to mention invitations by the Vatican and the mayor of Philadelphia himself: representatives of both have strongly denied to have had any contact with – let alone have invited – Marino in relation to the event. In the meanwhile, Carabinieri’s investigations produced surprising results: Marino regularly used city of Rome’s funds to pay for personal things, including holidays, dinners and presents. Marino stubbornly held to his position first refusing to resign, then doing it, but only to return on his steps shortly after. He was eventually forced to resign by his party, the PD, and Rome is now officially led by an ad interim commissioner, Francesco Paolo Tronca, who will lead the city until the next elections.