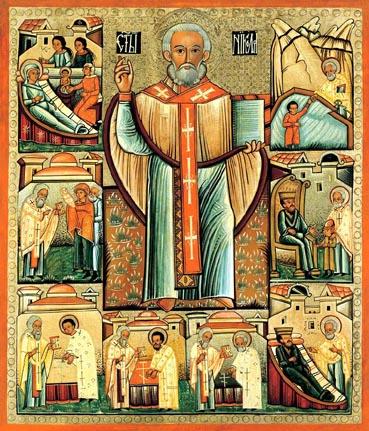 It seems the month of December is the time of gift giving regardless of your religious affiliation or nationality. This is especially true in the United States, where the image of Santa Claus is emblazoned everywhere since late November. Other countries have their own version of a benevolent older gentleman who gives out gifts in December, usually known as Father Christmas. Whatever you call him, be it Father Christmas, Sinterklaas, or even Santa Claus, this kind, gift-giving figure has its roots in a real man, the original Saint Nicholas – known in Italy as San Nicolò di Bari.

You may ask what this Christian saint has to do with Italy, but the Adriatic port city of Bari is in fact the final resting place of Saint Nicholas (San Nicolò). Long before San Nicolò’s image was transformed into the American Santa Claus, he was venerated as the patron saint of children, merchants and sailors, among other things. Much of saint Nicolò’s life is legendary, but there is enough evidence to prove that such a man existed. Moreover, if even some of the legends told about his kindness are true, then there is plenty to fuel his continued veneration over the centuries. It was the dedication to this saint during a tumultuous period of history that led to his bones being transported to Bari, where they lie to this day.

San Nicolò di Bari began life in the late third century AD as the son of a wealthy Christian family in Patara, a Greek-speaking colony of the Roman Empire located in modern Turkey. There is little historical documentation on his early life, but it is known that he became Bishop of Myra while still a young man. His life as a cleric spanned through the persecutions of Emperor Diocletian and later Galerius, to the eventual legalization of Christianity by Constantine. During that time span, San Nicolò is known to have destroyed pagan temples in his diocese and participated in the pivotal Council of Nicea in 325 AD, where he spoke out against the Arian heresy. One legend claims that San Nicolò slapped the heretic Arius in the face during the Council. This is a rare case of the saint showing a temper, as most legends and tales attributed to San Nicolò are of a much gentler kind.

San Nicolò was said to have saved the life of a sailor at sea during a voyage to Alexandria of Egypt, and this may be the reason why he is the patron saint of sailors. San Nicolò was also said to have saved three innocent men from an executioner’s sword and, in some of the more fanciful legends, restored murdered children to life. The most famous of all the legends attributed to San Nicolò became the basis for much of his modern day popularity as a gift-giver.

There are numerous versions of this legend, but they all begin with a poor man that could not afford dowries for his three daughters who, as a consequence, were not considered suitable for marriage. With no other opportunities available, the poor man was considering forcing his daughters into prostitution (some versions say they were going to be sold into slavery). When San Nicolò caught wind of this horrible situation, he decided to use his inherited wealth to help the three young women. On three separate occasions, late at night, San Nicolò secretly tossed bags of gold through an open window of the poor man’s house. According to one version of the legend, they landed in shoes or stockings that were drying by the fire. The first two sacks of gold allowed for a proper dowry for the two eldest daughters, but the poor man wanted to find out who the mysterious gift-giver was. In some versions, the poor man catches San Nicolò in the act, only to have the pious saint-to-be crediting God with the gift.

However, there is another version of the story that says San Nicolò, who understood the poor man wanted to catch him in the act, decided to drop the third sack of gold down the chimney, instead of using the window, as he did for the previous two. After providing dowries for the three daughters, the generosity of San Nicolò began to spread. After that, it was believed that any anonymous gift made in his diocese of Myra was attributed to him.

San Nicolò is said to have died of old age on December 6th in 343 AD, a rarity in a time when most saints were martyred. His bones were laid in a Greek sarcophagus in the cathedral of Myra, which became a popular pilgrimage site shortly after his death.

For over seven hundred years San Nicolò’s relics lay in Myra. However the city was then conquered by the Seljuk Turks, who threatened the safety of the pilgrimage site. In 1087, sailors from Bari arrived in Myra and stole the bones from the church in a race against Venetian sailors who wanted to do the same. On May 9th, 1087 the sailors returned to Bari with the holy relics of San Nicolò, where in 1089 they were placed in a new crypt by Pope Urban II. The people of Bari built an enormous Basilica over his bones, which now directed pilgrims to Southern Italy instead of Asia Minor. With a much safer pilgrimage route, San Nicolò became one of Western Europe’s most popular saints.

In Eastern Europe (especially Russia) and among other Orthodox Christians, San Nicolò was already immensely popular and even without his relics, Myra (modern Demre) continues to be a pilgrimage site for them. However, the city of Bari is often inundated with waves of Russian pilgrims, who desire to pray as close to their favorite saint as possible. In the late 19th century, Nicholas II, the last Russian Czar, made a pilgrimage to the crypt and donated money to help restore both his current resting place as well as his former tomb in Myra.

Not only was San Nicolò a gift-giver in life, but even in death his bones would produce a clear liquid called manna. This mysterious liquid is said to have healing powers and was once collected from his relics on the anniversary of his death, known as St. Nicholas day on the Catholic Calendar. Today the manna is collected on May 8th, during Bari’s three-day festival to celebrate the arrival of San Nicolò to Bari over nine hundred years ago.

San Nicolò – How Did He Become Santa Claus?

So how did this pious and generous saint become a jolly fat man delivering presents on Christmas Eve? The origin of the American Santa Claus stems from the traditions surrounding San Nicolò, but is more directly influenced by the Dutch tradition of Sinterklaas. As stated above, San Nicolò was one of Europe’s most popular saints, and traditions of gift giving on December 5th, the eve of his feast day, were widespread. The Dutch tradition of Sinterklaas gets its name from a shortened version of San Nicolò’s name in Dutch – Sint Nikolaas- and he is portrayed wearing the robes of a Catholic Bishop. This tradition was brought over by Dutch settlers to their colony of New Amsterdam and when the British took over the settlement, which later became New York City, they also took on the tradition of the gift giving Sinterklaas. The new settlers mispronounced the Dutch name, and so Sinterklaas became Santa Claus.

As the Santa Claus myth grew, the character became an entity unique to American culture, and started to resemble the historical San Nicolò less and less. Even though the Santa Claus tradition is so far removed from the veneration of San Nicolò, the most important parts have never changed. Both San Nicolò and Santa Claus are devoted to children and both are kind, gift giving figures known for their charity and selflessness. San Nicolò di Bari left such a mark during his life that his deeds of kindness ring true through the centuries, regardless of how his image is portrayed.