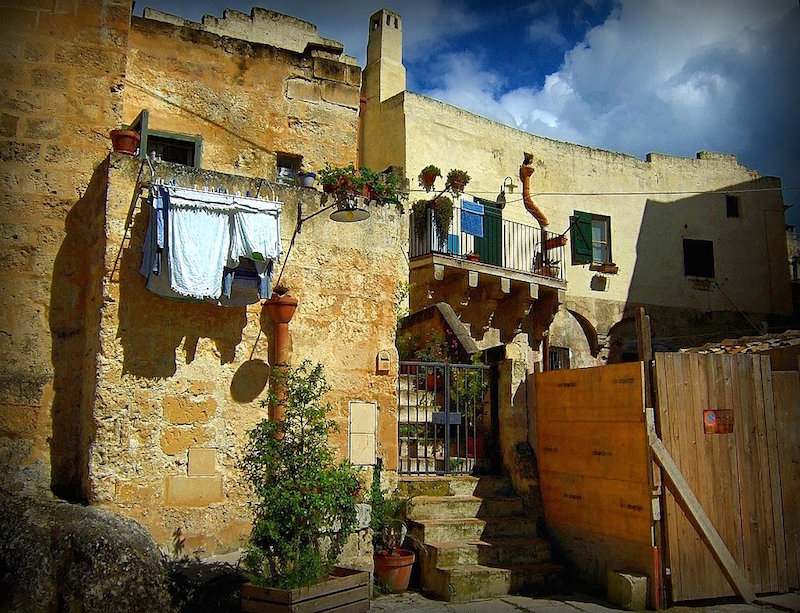 Basilicata, a region to discover

The region of Basilicata, in Italy, forms the instep of the Italian “boot.” It borders with Campania, Calabria, and the Tyrrhenian Sea. It is not a large region, as it measures only 9,987 sq km. The capital of Basilicata is Potenza, its two provinces Potenza and Matera. Its population is only of 611,000.

Basilicata, or Lucania as it is sometimes called, has little in the way of economic clout. Agriculture plays a major role, despite the fact that dry weather and scarce underground water supplies make farming difficult. Olives, plums, and cereals are grown, and sheep and goats are raised. Fishing is also a relatively common activity. Industry centers around chemicals and natural gas. About 55% of the population is employed in the tertiary sector (though many of these positions could also be considered agricultural), about 32% is employed in industry, and about 13% of the work force is employed in agriculture.

The region of Basilicata had a rough start. One of the first tribes to settle in the area was the Lyki from Asia Minor. They were followed by the Greeks, sometime between the 7th and 8th century BC. As waves of invaders tried to take over the region, the local Italic populations fought back: even the Romans, who were well know for their conquests, had a difficult time taking over the region. Islamic, Norman, and Spanish invaders all have taken a stab at controlling Basilicata. Maybe it is the unforgiving terrain of the region that gave to local inhabitants such an advantage over invaders and allowed them to hold out against the aggressors for such a long time.

Basilicata is a mountainous region. Though most of the mountains are arid and craggy, the Lucanian Dolomites are a particularly nice area of the Apennines. This area is highly wooded and has a number of picturesque little lakes. Over all, Basilicata’s landscape is rugged and primitive, making it a wonderful place to get back in touch with nature. Basilicata has been victim to many devastating earthquakes over the centuries, making it hard for the region to develop. The effects of such earthquakes can be seen in the local landscape and are fascinating from a geological standpoint.

The charm of Basilicata lies inherently in its numerous small ancient villages, which are not always simple to reach unless you have a car, because there is very little in the way of railways or air travel facilities in the region, a gap borne off the very geographical characteristics of the area.

Ceramic and textile handworks are popular and can be often bought in small, family-owned shops. Wood carvings are typical of the area and beautiful hand made works can be purchased by tourists.

While there are numerous small festivals and fairs held in the region, one of the most culturally significant is a festival celebrated in May in many villages of the region: the Sagra del Maggio, known in English as May Chopping Festival. The festival has ancient pagan roots, and revolves around the chopping of a large tree,  usually an oak, which is cut and then dragged into the town square. This older tree is “married” to a younger tree, usually a holly, in a picturesque ceremony.

This festival is common in many areas of Basilicata and is done to ensure the soil’s fertility and to guarantee a prosperous bounty in the upcoming seasons.

Basilicata is not a large region, but there is plenty of beauty to see and plenty of things to do. Tourists will be fascinated by the stunning architecture and historical art of the region’s numerous small churches and medieval castles. The coastline is also covered in some of Italy’s finest archeological ruins.

Basilicata’s greatest resource remains its people, who are friendly and helpful to travelers.

The outdoor markets of Basilicata are also a great attraction to tourists: they offer a great array of unique handmade items, typical of this specific region, which you would not find anywhere else.

Small family owned restaurants offer some of the finest delicacies in southern Italian cuisine, perfect for those who have a desire for spicy foods rich in complex flavors. Spicy sausages and freshly-caught game are among some of the region’s specialties.

Basilicata is the perfect place to immerse yourself into the true Italian experience free from all the trappings of busy tourist areas.