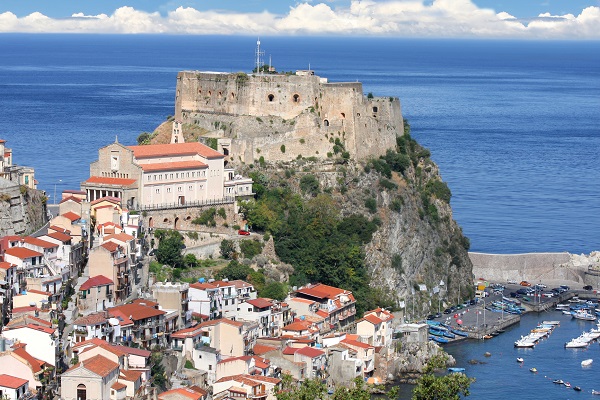 Calabria is a small little developed region which forms the tip of the Italian peninsula. The population is small at only about 2,012,000 persons and the economy, though growing, is weak. The region is difficult to navigate through the mountains and because of this communication networks and adequate road and rail systems have been hard to establish.

Of course, Calabria’s troubled history might also help explain the regions slow start to economic accomplishments. Calabria is one of the oldest regions of Italy with the first evidence of human presence in the region dating as far back as 700,000 years BC. Around 3,500 BC the first villages in Calabria sprung up. By the eighth century BC the Greeks had control over the region and it was a very important area for the Magna Grecia. Calabria was later conquered by the Romans in the second century BC. After the fall of the Roman Empire the region fell prey to the Goths, the Byzantines and later the Longobards around the ninth century BC.

The Byzantines regained control of the region in the tenth century and expanded the existing monarchy thereby helping reunite the region. The Norman and Swede also took a crack at controlling Calabria around the twelfth century BC. It wouldn’t be until 1860 that Calabria would be made whole and become part of the larger region of Italy.

During the confusion different groups tried many different techniques to stimulate Calabria’s economy including the introduction of several key crops and a few industries. Calabria’s economy is still based mainly on agriculture. Chief agricultural products include oil, onions, mushrooms, wheat and other cereal grains, wine, eggplant, figs, chestnuts, and citrus fruit. Calabria is the largest producer of bergamot oranges in Italy. The rinds of bergamot oranges are used to manufacture perfumes, teas, and other aromatic creations. Despite its small size and low population Calabria is responsible for producing a third of all the olive oil produced in Italy.

Calabria is fortunate to have a great deal of forested land and as a result most industry is developed around construction and building. Textile, clothing, and chemical industries are also present in the region. A substantial portion of the regions economic resources stem from the production and sale of handicrafts by individuals and very small family businesses. Tourism, which is increasing, also plays a major part in the Calabrian economy and is the motive behind some of the region’s most recent technological advancements.

Calabria has a beautiful coastline which was under distress due to pollution caused by improper waste disposal and annual flooding. Recently the government of Calabria, in an effort to preserve and protect its valuable coastline, has taken steps to create the most efficient and well designed water treatment system in all of Italy. Calabria now boasts one of the cleanest, nicest coastlines in the peninsula.

Calabria forms the toe of the Italian boot and is bordered by Basilicata and sandwiched in between the Ionian and Tyrrhenian seas. There is a lot of coastline in Calabria. No part of the region is more than 50km away from the coast. Calabria covers and area of just 15,000 km² and is made up of five provinces: Catanzaro, Cosenza, Reggio di Calabria, Crotone, and Vibo Valentia. Catanzaro is the capital of the region, but regional parliament is held in the former regional capital, Reggio di Calabria.

Calabria has awesome tourist potential. Currently the area is not overwhelmed by tourists. The picturesque scenery of Calabria will one day beckon hordes of people because nowhere else can one view such a beautiful panorama of nature. Tall, snow tipped mountains give way to thick luscious forests, white sand beaches, sapphire coast lines and crystal oceans. At the same time this setting is just a backdrop to wonderful rustic villas and impressive Greek ruins. Those interested in Greek history will find Calabria a great vacation spot. Because of Calabria’s Greek heritage the region is full of Greek ruins. In between gorgeous rustic mountain tops and lush olive stand small villas that conceal a rich history of Mediterranean influence. Ruins can even be found underwater near the shore line. Hobby divers often visit Calabria to see the many ruins left underwater by ships damaged off the coast.

Calabria hosts several world class sea side resorts as well as wonderful mountain top resorts dedicated to winter sports. Tourists will also enjoy watching local artisans produce any number of handicrafts, pottery and ceramics being the most common. Local restaurants serve the finest in Mediterranean influenced foods. Most of the cuisine of Calabria is heavily influenced by the Mediterranean. Pasta dishes involving peppers, onions and sausage sauteed with or without sauce are very common. Frittatas made with pasta and sausage mixed into the eggs are also prevalent. Eggplant is a favorite dish in the region and is served in a variety of ways. Like the food of Basilicata, Calabria cuisine is often very spicy and sometimes involves the use of chili peppers. Seafood in all its forms are highly popular as well as pork. Tourist might also enjoy one of the numerous festivals held in Calabria such as:

Calabria is still being discovered by tourists. The natural beauty of the area has not been spoiled by hotel chains and fast food. There are no huge crowds to contend with. The mountains still shine down beautifully, the coast is still clear and uncomplicated, the food is still indigenous to the region, and the people are still living the Italian way. Destinations like Calabria will not stay perfect forever.

As people learn about the rich history of the region and the overwhelming presence of wonderful artifacts and artwork that fills the region visitors will begin to flock to Calabria. Right now Calabria is a perfect vacation spot for the nature lover, scuba diver, sun bather, shopper, and history connoisseur alike. The Calabrian landscape with its ancient relics and modern farmsteads is a wonder to behold. The region is rich with art, religion, history, and culture. There is something for everyone in Calabria.

My parents were born in small villages outside of Cosenza. I was fortunate to travel there in 1992 and meet my relatives and visit the homes of my mother and father. While I have traveled to Italy 4 times, I only visited Calabria once. I’ll be making another journey to do some genealogical research hopefully soon.

Thanks. I will take a look Paolo

Some significant typos in this nice piece! Would ask the author to go through and correct. For instance the ‘Swedes’ never conquered Calabria, and certainly not in the 12th C BC!!

Very interesting article. My family is from Spillinga, after reading I am now tempted to visit the area.

I was born in satariano. My parents immigrated to Canada when I was 4 weeks old. Took an entire month on a ship to reach Halifax Canada.
I came back to satariano in 2018
For the first time since 1955. I just cried at the beauty of the area and people. My ancestry….. my culture so precious. My adult children gifted me this trip because their Nona caterina alwats talked about her beloved Calabria. My mother was so right. Beautiful beautiful beautiful home.

Our amazing place is so special and so little traveled by tourists!
Love my ancestral home, food, people, and traditions!

I loved it, my. Mother’s family are all from Reggio Calabria, my father’s side is from the Basilcata region It is a very beautiful place.

Thanx for this short history of where I was born.. I would like to know more.

Now I want to go there! My grandmother’s family is from Reggio de Calabria.