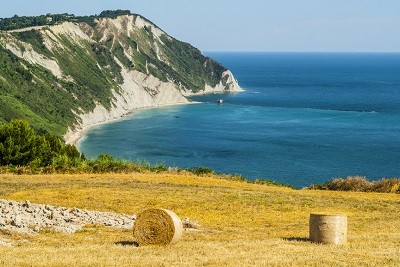 The Region of Le Marche has seen an influx of foreign tourism in the last decade thanks to advertising campaigns that highlight Le Marche‘s beautiful coast and rustic hinterland. Le Marche is centrally located, with the Adriatic Sea on the east and the region of Umbria, with the spine of the Appenine Mountains, to the west. Emilia-Romagna and San Marino border Le Marche to the north, at the Foglia river, and Abruzzi is to the south, the border marked by the Tronto river. Le Marche is characterized by a rugged and mountainous hinterland that gently rolls toward the sea, which is where most of the people of the region live.

The region’s inlands are sparsely populated and home to mountain gorges, waterfalls and caves, while the coast is home to beaches that are just becoming popular to foreigners, although Italian families have known about them for years. Le Marche has a nice mix of many parts of Italian culture: resort towns and beautiful beaches, rugged scenery and quaint hill towns, friendly townspeople, excellent food and a good sample of art and history. With all of this to offer, it is a virtual guarantee that Le Marche will not remain unknown outside of Italy for much longer.

The area has been occupied since Paleolithic times. The Piceni tribes ruled Le Marche until Greeks from Sicily and Celtic tribes from the nothern regions of the peninsula moved in, starting in the 4th century BC. The Piceni (named for their cultural totem, the woodpecker) would later be absorbed by the growing power of Rome after allying themselves with the Republic. After the fall of the Roman Empire, Le Marche was occupied by Lombard and Byzantine settlements and later Pepin, King of the Franks, would conquer the area in the name of the Church. This was the beginning of the Papal State, and like other parts of central Italy, also Le Marche was supposedly the rightful property of the Pope due to the forged Donation of Constantine. This area marked for centuries the boundary between Papal and Imperial lands, and the name Le Marche is derived from the Frankish word for “frontier”.

Regardless of who claimed rulership,  the people of  Le Marche always maintained a sense of independence while nominally accepting the Pope as their sovereign. When Papal power waned, feudal warlords such as the Malatesta, the Montefeltro and the Della Rovere took over, although the Papal State quickly moved in wherever a power vacuum existed. Napoleon interrupted Papal rule, but it would otherwise continue until the battle of Castelfidardo in 1860, when the Piedmontese army of the House of Savoia defeated the Papal army. Le Marche was absorbed into the new nation of Italy shortly thereafter, in November of 1861.

The food of Le Marche equally shares from the bounty of the sea as well as the farm. Brodetto is the most famous fish stew of the Adriatic coast, and varies in form from each coastal town. The marchigian versions of brodetto include red and gray mullet, cuttlefish or squid (or both), oil, garlic and saffron – served on either fried or toasted bread. Other seafood favorites include the port of Ancona’s stoccafisso (dried codfish, which is not native to the Mediterranean), and local varieties like sole, bream, clams and mussels. Vincisgrassi is the lasagna of Le Marche, made with ground pork, mushrooms, tomato and bechamel sauces, all topped with local truffles. Favorite meats include veal, rabbit, game birds (quail, pigeon), chicken and goose. Both meats and fish are usually done either in a porchetta style using fennel, garlic and rosemary, or potacchio (with onion, tomato, white wine and rosemary). The meat (beef, veal or lamb, mostly) “alla brace” is also quite popular, cooked on embers of wood fire. In Marche you can often find the “maialino”, suckling pig cooked in a woodfired oven.

Pecorino, especially young pecorino, is the most favored cheese of Le Marche, but the casciotta d’Urbino (PDO) is also popular. Le Marche desserts are not overwhelmingly sweet and often use sweetened cheeses like pecorino or ricotta as ingredients: think of sweet things such as calcioni and piconi. Other desserts include a pizza dolce, or sweet pizza and frustenga, a cake made with raisins, figs and walnuts.

The wines of Le Marche include full bodied DOC reds like Ancona’s Rosso Conero, the popular Rosso Piceno and and the sparkling Vernaccia di Serrapetrona (DOCG). However the real standout of Le Marche is its white wines, especially Verdicchio (dei Castelli di Iesi or di Matelica – both DOC), considered by many to be the absolute best wine to have with seafood. Bianchello del Metauro (DOC) is a traditional, straw colored white that is excellent with Le Marche‘s shellfish. Spirits of Le Marche include home made grappas and other infused liquors, but the most popular is Mistra, an aniseed liqueur used as a digestivo.

Macerata is a nice, small town that is right on the top of a hill, just about 300 meters above sea level. The city is pretty, probably not as breathtaking as some of the most famous ones such as Florence, Rome or Venice, however it still represents a pleasant visit and it is an interesting historical site to see. Two areas worth checking are the Porta Mercato (Market Gate) and Porta Montana, gates that in the past were access points to the city. The Cathedral completed in 1464 is also worth visiting, as well as Palazzo dei Priori and the palace of the Regione.

Ancona is the principal port of Le Marche and home to some of Italy’s best seafood. The city juts out into the Adriatic, on a spur of land that was once the location of an ancient Piceni settlement. The Basilica of San Ciriaco lies near the mouth of the harbor at the top of the Guasco hill and has been used as point of navigation for sailors since its completion in the 13th century. Close by, is Ancona’s most prominent Roman ruin, the excellently preserved Arch of Trajan. Other Roman, Etruscan and Piceni artifacts can be found in the very thorough and expanding collection of the Museo Nazionale delle Marche. Ancona is blessed with a sheltered harbor and today is one of the major jumping-off points to other locations in the eastern Mediterranean such as Venice, Trieste, The Dalmatian coast (Croatia) and the Greek isles.

Ascoli Piceno is a very old town, founded even before Rome. A particularity of this city is the travertino marble that has been used for many of its buildings. The main square, Piazza del Popolo, is one of the most beautiful of Italy and is surrounded by palaces built with travertino marble. Also in this square is Caffè Meletti, one of the historic cafes of Italy. From Ascoli are the traditional olive ascolane, deep-fried meat filled olives, an aperitif must.

The city of Urbino blessed the Italian Renaissance with two of its native sons: Raphael and Bramante. In return, Urbino was blessed with many of the artistic gifts of the time by being home to one of the greatest patrons of the  arts: Federico da Montelfeltro, Duke of Urbino. Duke Federico left such a mark on Urbino that he is still popular among townsfolk today, with a yearly festival held in his honor. His masterpiece, the Palazzo Ducale is the centerpiece of the old city center, now recognized as a UNESCO World Heritage Site. The Palazzo dominates the city skyline, with its twin towers being recognized throughout Italy as the home of a real Renaissance man. Today it is home to the Galleria Nazionale delle Marche, which contains a fine collection from the Duke’s artist friends. Urbino is home to even more art treasures among its neighborhoods including the Duomo, the church of San Giovanni Battista and the Oratory of San Giuseppe. The truly dedicated art lover will want to make a pilgrimage to Raphael’s birthplace along via Raffello, where a few more masterpieces await. When leaving Urbino, a trip to the tomb of Duke Federico at the church of San Bernardino will also reward the traveler with and excellent view of the city.

Pesaro lies at the mouth of the Foglia river and is both a lovely seaside resort town, as well as one of Le Marche‘s industrial centers. Pesaro’s coastline is home to a stretch of beautiful beaches, and is yet to be discovered by foreign tourists. Opera lovers will want to visit the home of Gioacchino Rossini – of “Barber of Seville” fame. A visit to Pesaro in August brings the world famous Rossini Opera Festival, where nearly every one of his operas are performed. Piazza del Popolo is the heart of Pesaro, dominated by the Palazzo Ducale: built by the ruling Sforza family, it has recently been restored. Pesaro’s Duomo has recently revealed a long lost Byzantine mosaic floor dating from the 5th century. Sun worshippers will find an array of beach options, from secluded public stretches of sand, to resort-style beaches where for a fee you can get a spot with a beach umbrella and a beach chair. A popular daytrip from Pesaro is the 13th century fortress town of Gradara, the best preserved walled town in Le Marche.

Sounds wonderful. Which area would you recommend as a base for a holiday in Le Marche? We do like mountainous areas – the sea sounds great and a day trip would be good but we are not bothered about being based near it. I more want to be in a rural hilly place where no-one minds if I practise my Italian on them!