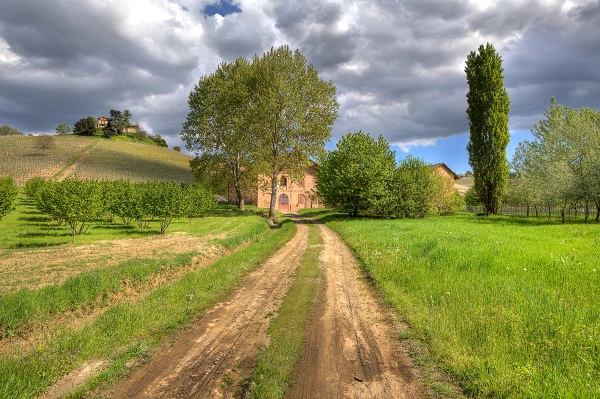 The name of the region derives from the Medieval Latin term Pedemontium, which means “at the foot of the mountains.” Piemonte is aptly named, as it lies at the foot of the Alps and has a culture and dialect that is closer to the South of France than other parts of Italy. It is bordered by France and Switzerland, as well as the Italian regions of Liguria, Valle d’Aosta and Lombardia. The area occupies the plain of the Po river valley, and produces much of the wheat and rice for the country in the area of Novara and Vercelli.

This region was once the home to the Ligurian peoples and later to the Gauls, before being absorbed by the expanding Roman Republic. After the fall of the Empire, the area was divided up by warring feudal lords before the slow consolidation of the region by the House of Savoia starting in the 11th century. Piemonte faced the wrath of Frederick Barbarossa as a member of the Lombard League, opposed to the Holy Roman Emperor. By the 16th century, the Savoia family had barely managed to escape extinction by wars and intrigue, only to emerge as the rulers of Piemonte. Their holdings were to include Sicily and later Sardinia, on their way toward the Risorgimento and the creation of the Kingdom of Italy. In many ways, the history of Piemonte is the history of the modern nation of Italy.

Local cuisine has been influenced by the close proximity of France and heavily relies on butter (as opposed to olive oil) for its recipes. However, there are some exceptions to this rule, such as the manufacture of white truffle oil. The Bagna Cauda is probably Piemonte’s best known dish: it is served like an oil fondue, and is another exception to the oil/butter rule. Cardi alla Bagna Cauda is a dish of locally grown chard served with the Bagna Cauda, a sauce (served hot, as its name states) made with anchovies, garlic and white truffles. Fonduta is another regional fondue dish made with melted cheese, milk and eggs. Piemonte is also the home to grissino, a thin and crispy breadstick that has become popular throughout the country and is often found in restaurants all over the world.

The Golden Fleece of gastronomy, the white truffle, is a mainstay of Piemontese cooking and is often found sliced thin on top of salads and pastas. White truffle oil is a sinfully delicious ingredient,  treated with great care since it is very expensive. Other regional dishes include local game such as rabbit, and boiled meat dishes of veal and ox tail. Local desserts include Zabaglione, a decadent concoction of egg yolks, sugar and marsala wine, served with cookies and, sometimes, with whipped cream, perfect for those cold Piemontese winter mornings.

Piemonte produces some well-known wines in the chalky hills of Monferrato. This region produces those “Asti white wines” that include Moscato and sparkling Asti Spumante. The region is also home to full-bodied reds such as Barbera, Barolo and Barberesco. Famous Italian vermouths, think of Martini and Cinzano, are also produced here, distributed worldwide and drunk locally as an aperitivo. Festivals are held throughout the region celebrating both its past and its many culinary delights, including several white truffle festivals in the fall.

This region is not only an agricultural center, but an industrial one as well. Piemonte’ capital, Turin, is an industrial powerhouse that has young men from other regions of Italy flocking to work in its manufacturing and chemical plants. The city is also the capital of Italian engineering, and its southern suburbs the home to automobile manufacturers Fiat and Lancia.

Modern Turin is proud of its past, but not obsessed with it.  However, the city  does have an extraordinary history, as home to the House of Savoia. Turin is still home to the noble house’s greatest treasure, the Shroud of Turin. Car enthusiasts should visit the impressive automobile museum.

Turin is a great place to visit since it has a little bit of everything: shopping, cars, history, religion and pleasant open spaces. All of this accentuated by delicious regional foods, mountain views and an unexcelled wine industry. The city can be seen on a day-trip or  used as a base for a larger tour of the region.

Alba is a charming medieval city, with old houses and stone towers known for its excellent wine. The city is in the heart of white truffle country and each fall truffle lovers the world over converge here for the annual truffle fair. Alba is also home to wine favorites, such as Barolo and Barbesco. To the south of the town are the chalk and clay hills of the Langhe, covered in vines and oaks. A view from this area explains the culinary gifts that nature has bestowed upon Alba. Langhe, Monferrato and Roero where recently awarded a place in the UNESCO World Natural Heritage List.

Asti is another town that has retained its medieval appearance of red bricks and yellow limestone. Despite local industry, Asti is still mainly an agricultural center and today is best known for the sparkling white wine of the same name, as well as many other culinary specialties. Asti Spumante, the regional sparkling white wine, is complemented by a locally made red that is equally deserving of praise. Barbera d’Asti is the finest of this regional wine, which is made across Piemonte. A local goat cheese called robiola is served with a unique mustard sauce, often also with truffle stuffed salame.

That’s a lot of things to see in Piedmont, it’s always beautiful to read these kinds of articles, thanks!

Hello Justin, first of all thank you so much for sharing this post.
We are a tour operator base in Alba, Piedmont, Italy. We would like to know if is possibile have a post blog made by you or a review about our services.

If you are around Piedmont Area, you will be our special guest.
King Regards Carlo