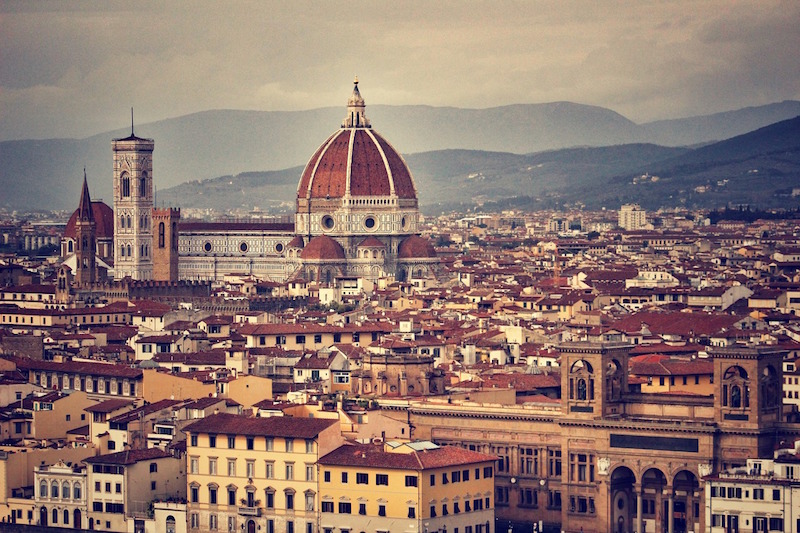 Florence is, without a doubt, one of Italy’s most appreciated travel destinations and it really couldn’t be otherwise, with all its art, history and good food. Most of us are familiar with its beauties, even if we’ve never had the luck to visit, but do we really know everything about it? What’s hidden in its streets and palaces or under Ponte Vecchio? What can we still discover about the magnificent home of Dante, Cosimo and Lorenzo de Medici and Benvenuto Cellini?

These five curiosities should quench our thirst for knowledge about Firenze, cradle of the Renaissance, mother of the Italian language and Tuscany’s most precious gem. 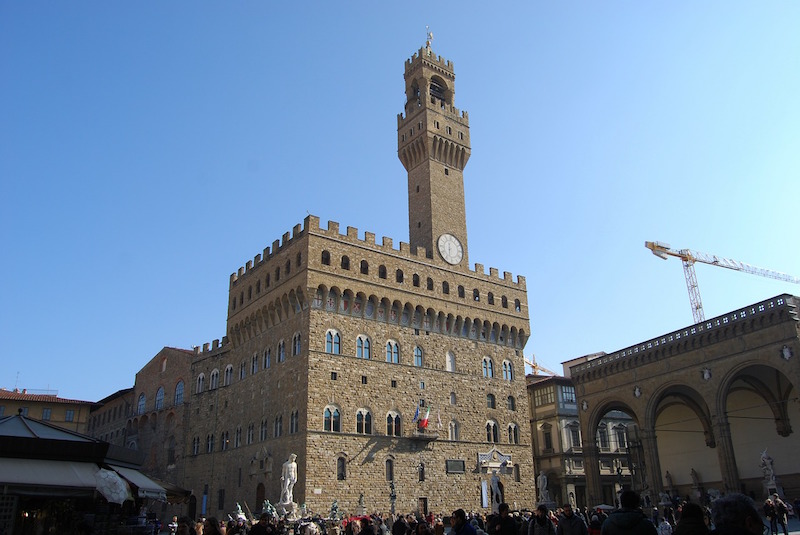 1. Michelangelo’s etchings are hidden in its streets

The name of Michelangelo is tied indissolubly to that of Florence through his art and genius, but did you know a hidden work of his can be admired on the external walls of Palazzo Vecchio, at the very heart of the city, in Piazza della Signoria?

Indeed, if you turn your back to Baccio Bandelli’s Hercules and Cacus’ statues, looking to the right of Palazzo Vecchio’s main entrance, you’ll notice, almost on the building’s corner, the etching of a human head. Legend says that a Florentine of a somewhat bothersome nature – and who owned the artist a good amount of money – used to stop Michelangelo almost every day in that very spot, to complain about his misfortunes and financial failures. Buonarroti, who was certainly a genius, but remained famous in history for not being particularly patient, grew quickly tired of these daily meetings to the point he, one day, started nonchalantly to carve his inopportune interlocutor’s profile on Palazzo Vecchio’s walls. Some say he simply turned his back to the man, while others maintain he sketched him in stone without even looking, hiding his hands behind his back. Even if the story were a legend, the presence of the etching – familiarly called the “importuno,” the untimely or bothersome – is very much a thing of reality.

A curiosity within the curiosity: there’s a second version of the story, according to which the stone portrayal on Palazzo Vecchio, always realized by Buonarroti, didn’t represent an annoying acquaintance of the artist, but a man sentenced to the stocks he saw just there, in Piazza della Signoria. 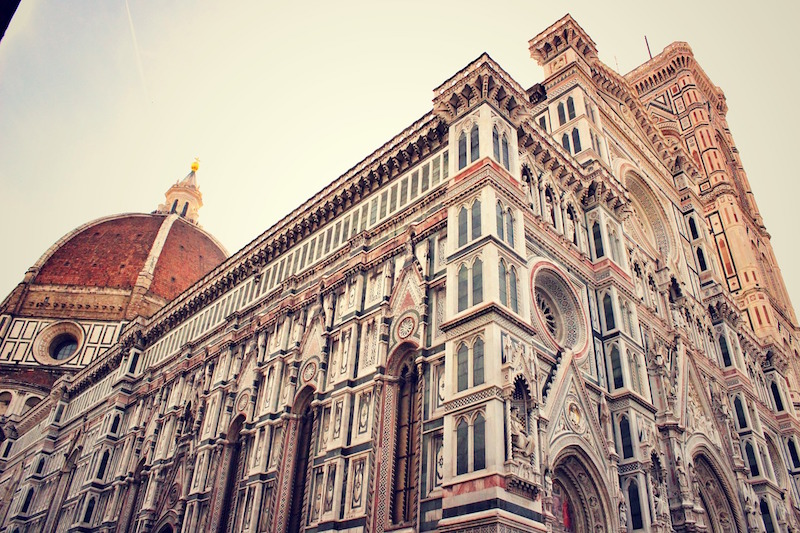 2. A cuckolded husband is remembered on the façade of its cathedral

Far from me the will to be disrespectful: this is really what Florentine tales say.

If you look closely to the Duomo’s façade, you’ll note the presence of a bull-shaped gargoyle that many believe was made to symbolize the bulls used to carry stones and materials to the building site while the cathedral was constructed.

There’s another, much saucier version of the story, though: apparently, a beautiful woman, married to a tailor, used to live near the building site, her bedroom windows opening directly on it; fate wanted she began a steamy relationship with a stonemason employed on the site. One day, the man found himself working away on a piece of stone high up on the church’s façade: it only took him one second to notice that, from there, he could see his lover’s bedroom. The temptation to play a blatant practical joke on her husband was too strong to resist, so he gave the gargoyle he was busy sculpting the features of a horned bull, symbol of the cuckholded, looking in the direction of his lover’s house. 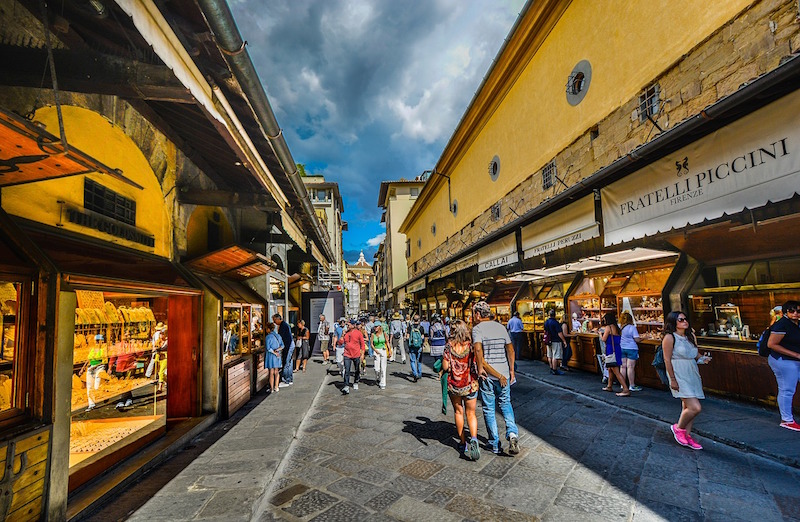 3.The old stores of Ponte Vecchio were not what we know them to be

What a characteristic, beautiful landmark Ponte Vecchio is. Unique in its architecture, magical because of the aura of history and art brought by its seemingly endless, glittery line of goldsmiths’ ateliers. Yes, today Ponte Vecchio is home to Florence’s most exclusive jewelry creators and sellers, but it hasn’t always been the case.

Ponte Vecchio, let’s say, had much humbler beginnings. The history of the bridge dates back to the Middle Ages and to the early years of the Florentine Renaissance: it was 1345 when Ponte Vecchio got the looks we all know now. However, for more than a century, its small stores were not occupied by elegant and exclusive goldsmiths’ workshops, but by much more proletarian – forgive the anachronism – green grocers, butchers and fish mongers.

Why, you may say, what was the problem with that? Well, the problem was that all of Ponte Vecchio’s commercial residents had the habit to dispose of the large quantities of refuse resulting from their trade directly into the Arno river. Yes they, quite literally, dumped all the rubbish under the bridge, causing miasmas deign of Dante’s Inferno.

So when, in 1565, the Corridoio Vasariano was constructed, Cosimo I de Medici ordered all the stores on the bridge to be replaced by goldsmiths’ ateliers. You see, the Corridoio Vasariano was created to join Palazzo Vecchio to Palazzo Pitti and crossed Ponte Vecchio: aristocratic nostrils, Cosimo must have thought, were too delicate for the rotting tanginess of Ponte Vecchio’s air. The shine and preciousness of gold, on the other hand, would have fitted just fine.

And this is how, ladies and gentlemen, Ponte Vecchio turned from a popular corner of Florence, into one of its most exclusive spots.

4.There is a window that never closes

Yes, and not because of an absent minded resident.

It’s a window of Palazzo Budini-Gattai, also known as Palazzo Grifoni in Piazza Santissima Annunziata, just opposite the Basilica. On the right hand side of its façade, a window always keeps its shutters open. Legend tells us that, sometimes towards the end of the 16th century, young Lord Grifoni and his wife moved into the palace, shortly after their marriage. However, the man was soon forced to leave his wife to join the army and fight to defend Florence: the day he left, his beloved wife waved goodbye to him from the very window we still see open.

For months, the woman sat by the window reading or embroidering, waiting for her lover to return. Months turned into years, years into decades and Grifoni never came back from that battle; yet his wife waited for him faithfully, by that very open window, until the day of her death.

After her passing, the palace’s residents went on with their lives, finally closing the window. It wasn’t a good idea. As soon as the square was no longer visible from the room, books started to fly in the air, furniture moved and objects broke against the walls: the dead woman’s spirit was still there, and wanted to keep her timeless wake by the open window for eternity. From that moment, the shutters were never closed. 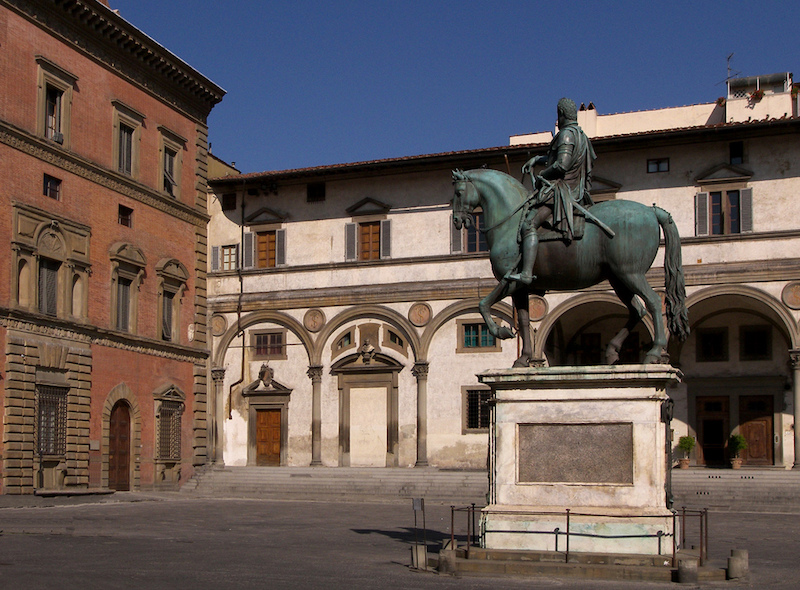 This last curiosity is rooted in a much more recent past than the others described in this article. We are at the end of the 1980s when a statue of the Holy Virgin Mary pinching her nose closed in disgust made her first glorious appearance in Via Toscanella. Nicknamed “La Madonna del Puzzo,” or the Madonna of Stench because of her peculiar posture, it was conceived and created by artist Mario Mariotti, resident of the area, tired of the unbearable smell of urine that plagued the area because of the lack of manners of passersby.

Mariotti thought it was a good idea, a way to passively and artistically protest against rudeness. Needless to say, locals loved it and supported his initiative, but rude people, alas, kept on being rude and never quite stopped urinating where they shouldn’t. Actually, a few years later, large rubbish bins were placed just opposite the sculpture. As we say in Italy: “oltre al danno, la beffa”.

Florence is known for its history, art and beauty, yet even when we think to know everything about a place these curiosities and quirky anecdotes come our way to demonstrate how wrong we are: just imagine these five little tales are only a fraction of the thousands of small, incredible stories the city holds secret for us to discover and appreciate.

Buongiorno,
Grazie mille. We have been blessed to visit Firenze a few times and love the food, people, history, art, and beauty of walking through from the Mercato Centrale to the Piazza del Michelangelo. We will pay better attention to your story highlights next time. Thank you again.