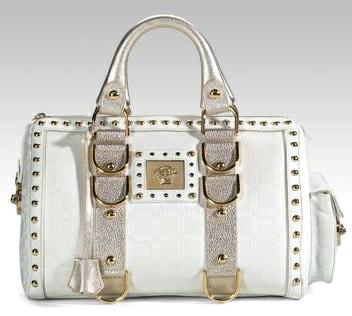 Dolce and Gabbana Designer Handbags
Dolce & Gabbana has never shied from over-the top-sexiness, and this shows up in its bags. The brand’s biggest champion is Madonna, and the designer duo have designed time and again for her tours.

Dolce & Gabbana is all about shiny, flashy, in-your-face fashion. Patents, foil finishes, obvious zips, riotous color are all features of bags from this brand. Though they do make serious looking stuff like the Miss New Easy Way or the Dolce & Gabbana Lily, which are about as sensible as you can get, that is for niche buyers, and not the quintessential Dolce & Gabbana clientele.

The Dolce & Gabanna style is more like the Dolce & Gabbana limited edition colored snakeskin bag of which there are only ten made, one of which is seen here on Lindsay Lohan

Another colorful series is the snakeskin patchwork, of which Jessica Simpson has been seen sporting the clutch version, and Beyonce the big shopping bag.This series was a big hit on the Fall 2008 Runway, and adds just the right amount of bling to accent a plain outfit. Another favorite is the Dolce & Gabbanna Coin Purse Bowler, a harlequin snakeskin bag seen recently on Lindsay Lohan.

Dolce & Gabanna designer handbags are for you if you want to express your inner diva and make a vibrant, almost garish fashion statement. This brand caters unabashedly to the bold and the beautiful.

The brand Armani has been almost an antithesis of Versace down the years the two fashion giants have vied for space on the world fashion stage. Armani is all about subtle, understated and discreet allure, where beauty is sought in pastel, conservative tastes, and clever, unexpected play of textures.

This tradition of hushed glamor has translated into Armani designer handbags, and these bags are carried by women who like the idea of being stylish without standing out or being loud. One of the most famous bags of 2008 has been the Giorgio Armani Sirena bag, which has been seen on the arms of Jennifer Lopez, Victoria Beckham, Charlize Theron, Beyonce and Hilary Swank. It is made from the skin of a special tilapia fish exclusively found in Thailand using a special nubuck-effect treatment which creates a flatter, scaly appearance, and a velvety texture.

As said before, Armani likes to play with textures, and this is evident in the Armani Pleated Shoulder bag. This unusual bag is created in plisse Napa leather, with discreet gold-toned hardware which blends in with the beige pleated background. Another winner is the Crocodile embossed series. The Armani Crocodile Embossed Tote has been seen on Victoria Beckham, and it looks like the perfect textured arm-candy for a diva out shopping, or to an exclusive lunch date. Its hard, structured contours and snug handles make for a comfortable yet sleek-looking bag.

Another gorgeous, (and at 9000$, expensive) offering from Armani is the Armani Crocodile Embossed Shoulder bag, seen on Katie Holmes. This bag, with its intricate handle fixtures, drawstring detail, and the sheer beauty of its shiny texture, is an absolute stunner.

Armani designer handbags are beautiful, discreet, and made with an eye for detail. Carrying Armani bags is a pleasure, because though these bags move seamlessly between day and night, they distinguish their wearers as stylish, sophisticated urban socialites.

Besides these brands, there is also Roberto Cavalli, which is fast emerging as a celebrity favorite. Moschino, with its Cheap & Chic bags, has also been seen on various young celebrities.

Designer handbags are now one of the most coveted items for a fashion maven living in or traveling through Italy. An Italian designer handbag is a piece of exquisite craftsmanship and boasts of some of the best raw materials. The irrepressible good looks, not to mention the inherent glamor of toting around a designer label is what will keep bringing stylistas and party kittens coming back to the gorgeous outlets all over the world that sell Italian designer handbags.