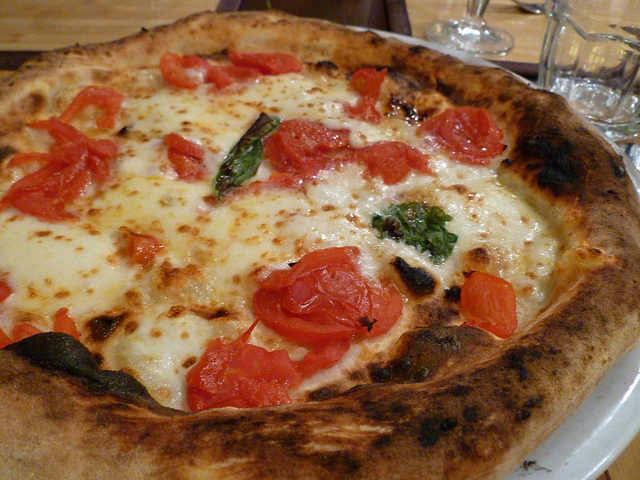 Facts about ItalySaying that food is important to us Italians is stating the obvious. We use food to welcome, to sooth, to show love. We cook when we’re down and when we want to celebrate, we use food to show our regional roots. Each family has a story to tell, and you can bet in each and every one of them food makes an appearance at some stage.

If you’re an Italian food lover, you’re probably aware of a thing or two about our cuisine: you can certainly tell the difference between grana padano and parmigiano reggiano and have very likely mastered the art of making a perfect, authentic carbonara.

But you know what? Food in Italy still has some quirks and curiosities to disclose. Fear not, though, we gathered some strange, or little known, facts about Italy’s culinary prowess, from ancient fans of über-popular dishes, to deliciously over the top new trends and cultural recognition for some of our most loved specialities.

Read on and learn with us about…

Well, not the pizza itself, but rather the history, skills and traditions of neapolitan pizza making. You may be already aware of the fact that “pizza napoletana verace” has been given a S.T.G. (guaranteed traditional specialty) denomination by the EU in 2010. This means that only what’s made following specific techniques, using specific ingredients and within a specific area – that of Naples, of course – can be called a real pizza napoletana. In 2011, Italy did submit the heritage of pizza napoletana to UNESCO as a potential candidate to its Intangible World Heritage, but without luck. The project wasn’t abandoned, though, and last year Alfonso Pecoraro Scanio, former leader of the Italian Green Party created an online petition, widely supported all over the world also through the hashtag  #PizzaUnesco, to bring it once again to the attention of the UNESCO commission. Apparently, one of the main drives to re-enter the candidacy was the fact another worldwide famous pizza, New York pizza, had been thinking to get UNESCO recognition.

If accepted (the decision should be made this Spring 2017 in Paris), the heritage of neapolitan pizza making, with all the skills, ingredients and traditions related to it, would become the first food related entry in the prestigious UNESCO Intangible World Heritage. Because pizza is, indeed, more than food: it’s culture.

2. Cicero and Horace were lasagne lovers

I’m a classicist, yet I didn’t know it. Apparently, the origins of one of Italy’s most loved dishes, the ubiquitous and comforting lasagne, date back to the second century before Christ, in the glorious times of ancient Rome. Romans were fond of laganum, a dish made with thin layers of pastry made with water and flour, then baked or cooked directly on the fire. Rome’s own culinary expert extraordinaire, Apicius, would call it lagana and described as a concoction of thin layers of pastry mixed with meat and baked. Similar, indeed, to our modern lasagne. Horace and Cicero were great fans.

3. We’re not the largest consumers of coffee in the world

Italian coffee remains without a doubt the most famous of all kavas and of course we consume it in grand quantities (I’m on my…let me see… fifth coffee in the day just now and we’ve just passed lunch time), but alas, we’re not the most addicted to it. According to a 2014 research, Italy only reaches the 42nd position in this curious list, with 0,336 cups per capita a day. The biggest coffee consumers in the world are, apparently, the Dutch, with a hefty 2,414 cups a day each.

Mind, there may be a catch: the measuring unit used as “cup” is your ordinary Starbucks americano cup, which we barely use in Italy: you know the way we are, we prefer short, intense espressos.

4. If you want to find new food trends, Naples is the place to go

We’ve just mentioned how Naples is the true home of one of Italy’s most traditional foods, pizza, and certainly the partenopean city is a place where food is taken very seriously: in Naples, you don’t mess with food. Food is art, tradition, history and Neapolitans, possibly, identify with what they eat even more than other Italians.

Yet, Neapolitans are extremely creative, so it comes as no suprise, in the end, to find out it’s here that Italy’s new food trends tend to be created. Mind, we’re not talking about foreign cuisine or international imported products, we’re talking about new takes on bona fide Italian, nay!Neapolitan, classics.

Apparently, it’s become increasingly popular to make rich, decadent Neapolitan food staples even richer and more decadent, following what can only be defined a culinary version of the old Italian proverb “chi più ne ha, più ne metta”. Don’t be surprised, then, to see people around the streets of Naples eating pizzas topped with potatoes crocché (the city’s own version of potato croquettes), or gigantic versions of the same cut in a half and stuffed with any type of delicacy, from buffalo mozzarella to friarielli and sausage.

Another super popular take on a traditional neapolitan dish is Pizzeria da Salvatore‘s pizzatiello, an hybrid between casatiello (a savory cake typical of Easter) and pizza: take a disk of pizza dough cover it with all that you’d find in a casatiello (cheeses, boiled eggs, bacon, cold cuts) fold it over like a calzone, top it with more cold cuts and cheeses, bake. If you, like me, think that all this sounds utterly delicious, then you should check out the Agrodolce, but make sure you have the best restaurant in town on speed dial for delivery 24/7 because you’re going to get hungry after reading.

5. Some things are legally forbidden in the kitchen

The great thing about food is that it mirrors the cultures that created it. That’s why some things are common, let’s say, on Chinese tables, but may not be on Italian’s and vice versa. Of course, modern globalization means these culinary differences are no longer as stark as they may have been in the past, still, there are things we cannot eat because the law say so. In Italy, for instance, plenty of fish varieties once commonly eaten are today forbidden because of EU legislation: it’s the case of, for instance, “datteri di mare” (date mussels) and fish fry of many kinds. In Liguria and Piemonte, it was common to eat anchovy fry, boiled and dressed with lemon and olive oil, or in a frittata: I remember fondly when my grandmother would make “gianchetti” (literally, “little white ones” in Ligurian dialect, but traditionally the name of anchovy fry) salad for me as a child, one of my favorite dishes. Alas, I get pretty nostalgic indeed thinking about it, as it’s not very likely I’ll ever eat it again. Before you start asking, no, grandma wasn’t a criminal: at the time eating fish fry was still legal.

The law has forcibly taken off our tables other once-common meats: in spite of being present in the old recipe books of more than an Italian region, we can no longer eat squirrels, thrushes and dormice, the latter once favored by the same Romans who invented lasagne (see above).

In the end, considering these restrictions have been implemented to safeguard wild animals and their prosperity, it’s all good.

I’ll be perfectly happy with one of those pizzatielli or a giant crocché stuffed with salsiccia and friarielli, thank you very much.