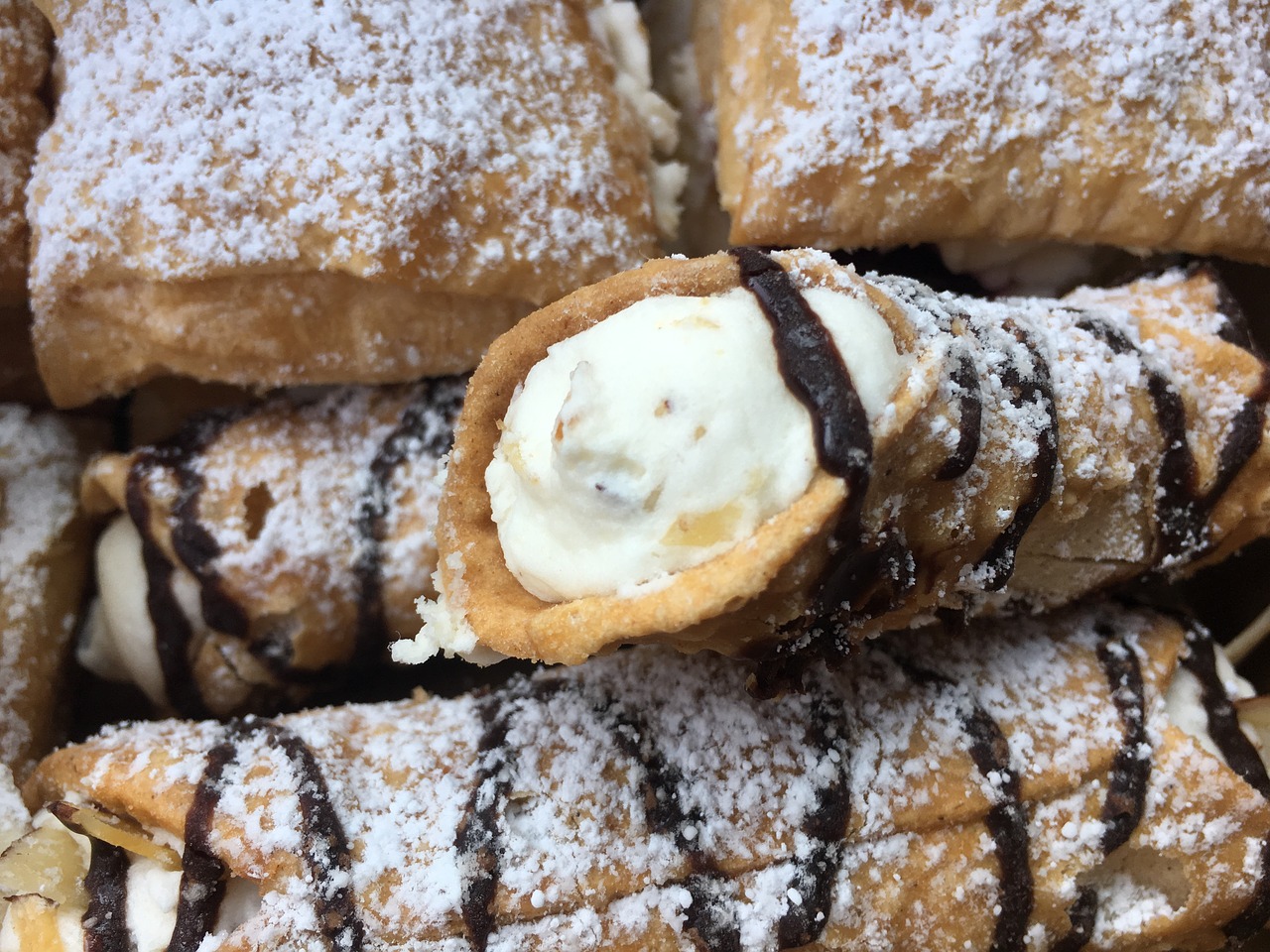 Stand up if you, too, think that cannoli Siciliani are, hands down, the most deliciously decadent dessert on the face of Earth: there is something about them, about the perfect balance between crunchy and creamy, between incredibly sweet and unexpectedly flavorsome, that makes them to die for.

Allow me to be a tad risquée here, because I think the best way to describe how they taste is to compare them to the feeling you get when, finally, you manage to passionately kiss “that” man or woman you’ve been dreaming about for ever … you know… your own Bradley Cooper or Monica Bellucci, if you will: it’s intense, almost overwhelming in its lusciousness and, without a shadow of a doubt, you know you cannot get enough of it.

To be honest, though, the mildly PG description above is not that inappropriate when it comes to the history of cannoli, and at least to some of the many legends surrounding their origin. In fact, as you are about to discover, there may be much more spice in cannoli and their history than in a passionate kiss.

Cannoli Siciliani: created in a harem by besotted concubines?

That cannoli are a delicacy inspired by Arab cuisine is quite simple to recognize: even if ricotta, the undiscussed queen of Sicilian desserts, had been known on the island for centuries, it wasn’t until the Arab domination that it began being sweetened. This makes a lot of sense also because the Moors were familiar — and largely used — sugar, which was, on the other hand, little known in Italy in those times: the Romans, centuries before then, knew about it already, but considered it a medicine, and preferred honey and figs to sweeten up their dishes.

Of this opinion was Duke Alberto Denti di Perajno, a culinary expert who once famously stated that “cannolo can’t be a Christian dessert: its variety of flavors and its luxurious combination of ingredients betray a clear Arab origin.”

So, we are in Sicily, between 827 and 1091 AD, the decades of the Arab domination, more precisely in the city of Caltanissetta. Only thing, it wasn’t called like that, then, but Kalt El Nissa, that is, “women’s castle.”

Why, are you asking? Well, because the town was known for the large amount of harems it hosted, where the many concubines of an — we want to imagine very handsome — Arab prince resided.

We can imagine them, languidly awaiting their master and beloved, possibly chatting with one another, possibly lining their eyes with kohl to make themselves prettier for him. Yet, those warm Sicilian afternoons were tedious sometimes, and so they took a fancy for cooking.

Yes, cooking. In the harem’s kitchen, they created a special dessert for their prince, a dessert so rich and delicious it could only be compared to him: it was our cannolo Siciliano. And here’s where the story gets spicy, because apparently the girls chose that shape and girth thinking of their beloved’s… member.

When concubines turn into nuns

Yes, nuns. Hang on though, how do we end up from a harem filled with naughty concubines to a pious medieval convent? It’s interesting how, in fact, the convent is the place recurring the most when it comes to the origins of cannoli. In it, many variations of a similar legend are set.

One of them, for instance, moves the moment of the invention of cannoli right after the end of Arab domination in Sicily and the opening of all harems.

No longer protected and fed by the sultan and, more importantly, finally free from subjugation, many concubines set out to begin a new life, but things weren’t as they had imagined. In a society dominated by the strictest of morals, their past was bound to be a stain impossible to remove, and if they could deal, we may imagine, with slander and calumny, it was certainly harder to live without a decent, if humble, job.

And so, many of them sought refuge where they knew a helping hand couldn’t be denied to anyone: convents. Many embraced religious life, others just offered their help to the congregation in exchange for a place to stay and a bowl of soup and some bread every day. Here, former concubines introduced nuns to the culinary creations they had become familiar with while living in harems including, you guessed it, our beloved cannoli.

However, other historians are adamant that, while certainly tied to a conventual context, cannoli’s origins have nothing to do with former concubines and harems at all.

Nuns! And nuns only!

According to this specific theory, the nuns of Caltanissetta must have had a very playful nature. We’re, once again, sometimes during the Middle Ages and Carnevale was about to start. Legend says a group of nuns, eager to join the cheerful and cheeky atmosphere that goes naturally with this time of the year, made up a fountain with edible faucets — cannoli’s crunchy scorza — from which luscious ricotta cream came out instead of water. Here we have them, our cannoli: born of the clever culinary abilities of the brides of Christ.

Gaetano Basile and the merging of two legends

Someone says it was the nuns at Carnevale, someone says it was concubines who wanted to honor their prince’s manly attributes. Then, there’s journalist Gaetano Basile, an expert of Sicilian popular history and well known author, who sort of brings the two narratives together. Basile is convinced cannoli were, indeed, made for the first time to irreverently celebrate Carnevale by making a pastry alluding — very blatantly — to male genitals. Of course. A bit of both worlds, according to Basile.

Cannoli and the Romans?

Nuns or concubines, phalli or faucets, our cannoli were probably born during the Middle Ages, the result of Arab influence on the flavors of Sicilian cuisine. This is not to say, though, that Sicily didn’t produce some sort of cannolo-like pastry well before eastern exoticism hit her shores.

In 70 BC, the greatest orator of them all, Cicero, mentions a “sweet edible tube made of flour and filled with milk cream,” he apparently had been served while in Sicily. Reminds you of something? Yeah, exactly.

…and so goes the legendary tale about the origins of cannoli Siciliani. Or many tales, actually.

Today, cannoli are one of Sicily’s — and Italy’s — most famous desserts, and while every pasticcere will tell you they have their own recipe, there are things, when it comes to making cannoli, that are dogma:

There is more freedom when it comes to cannoli’s size and also to the way they are decorated. While candied fruit is what you usually find at the two extremes of your cannolo, grain hazelnuts or pistachios are also used.

Palermo invented cannolicchi, smaller cannoli the size of a finger, but with the same delicious taste. In the Piana degli Albanesi area, on the other hand, cannoli became “giganti,” much larger than the usual 15/20 cm traditional ones. Around Trapani, especially in Dattilo and Fulgatore, cannoli are also larger, and their filling is not as sweet as you’d expect, with the texture of ricotta kept “grainier,” for an overall more rustic taste.

Whichever variety you choose, whichever Sicilian town you eat it in, remember that the real cannolo Siciliano has a PAT (prodotto agroalimentare tradizionale) denomination, which means it is a traditional agro-food product of Italy.