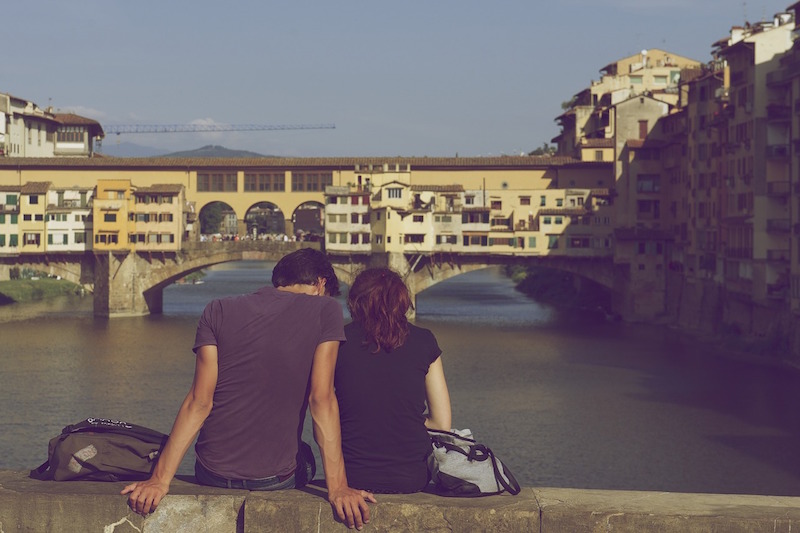 “The land of love stories” could well be yet another of Italy’s nicknames. In the end, hundreds of thousands of besotted couples come to our shores each year to enjoy romantic holidays or to marry. Then we have Venice and Rome, with that perfect mix of art, beauty and magic that makes them the perfect retreat for a romantic trip.

It’s certainly not by chance, then, that Italy found itself backdrop for so many romantic love stories: of course, we have Shakespeare’s Romeo and Juliet, but the list could go on forever and not only thanks to literature. Historical figures, sometimes, offered great examples of love and romanticism, at times even more surprising and touching than those artistically conceived by writers and poets, as in the case of Vittorio Emanuele II and Rosa Vercellana or Benito Mussolini and Claretta Petacci.

Other love stories were inspiration to fiction and poetry, as in the case of Paolo and Francesca or Dante and Beatrice. Always, at least in the cases you’ll read about today, Italy cradled the hearts and the feelings of these – more or less tragic – lovers, symbol of romantic struggle, and undying dedication.

If you’re familiar with Dante and his Divine Comedy, you certainly know about Paolo and Francesca, tragic lovers of the fifth Canto, condemned to be eternally swept around by infernal winds, just as in life they had been by lust. Dante, who knew their story, was clement and allowed them, at least, to be together in death.

The reality of their love, however, makes you wonder whether these two really deserved damnation. Francesca was the young daughter of Guido Minore da Polenta, Lord of Ravenna and Cervia. As it often happened then, we’re in 1275, her family decided to create an important political alliance by offering her hand to Giovanni Malatesta, a powerful nobleman, who had supported Guido’s recent efforts to expand his territories. Malatesta wasn’t a charmer and Francesca’s father feared his daughter would refuse the union if she met him.

So, the two families agreed to lure the girl into marriage with trickery. She was introduced to Giovanni’ s youger brother, Paolo, handsome and charming, who pretended to be Giovanni and married her by proxy. When the girl found out, nothing could be done and she accepted her fate, also giving a child to Giovanni. Paolo, probably feeling guilty for having taken part in her deception, began visiting her regularly, bringing some joy to her lonely days. The two soon fell for each other and it became hard to hide it, to the point that even Giovanni became suspicious. One day, while Paolo and Francesca were alone, reading about Lancelot and Guineviere’s love, they chastily kissed each other: just then, Giovanni entered the room, catching them in the act. Blinded by rage and jealousy, he killed them both with his sword.

Dante, who knew a thing or two about ill-starred love, had understanding words for them, in spite of giving them a place in Hell: in the end, they were victims of unfortunate circumstances more than their own lust and misbehavior.

Dante, Petrarca and their “Donne Angelo”

Love and literature are often inseparable, especially in medieval poetry. In the times of Dante and Petrarca, the angelic woman, ethereal, perfect and cool, was a literary topos, but the two poets had the luck to meet each their own: Beatrice and Laura. Their love stories ran parallel in nature and, alas, tragic conclusion, and left us with some of the most heartfelt verses in the history of literature, even though neither Dante nor Petrarca ever concluded anything with their darlings. In fact, there was so little real meat on the poetic bone, that for centuries critics did wonder if the two ladies ever existed.

Today, we know they certainly did: Dante’s love was for Beatrice Portinari, a wealthy Florentine whom he met only a handful of times in his life and to whom he only spoke once, as he well recounts in his Vita Nova. Portinari eventually married with a Florentine nobleman, Simone de’Bardi, and Dante with his Gemma Donati: his love for Beatrice was to remain entirely platonic and ended up tragically, as she died young, possibly while giving birth to her first child.

Petrarca‘s Laura was also real, even though shrouded in some more mystery. Her name was Laura de Noves, an Italian (French, for some) noble woman, married with Count Hughes de Sade, an ancestor of the infamous Marquis de Sade. Just as Dante and Beatrice, it’s unlikely Petrarca and Laura ever had a relationship; in fact, historians are not even all in agreement she is the woman who inspired Petrarca‘s lyrics. Yet, she remains the most likely candidate.

Immense love, certainly, that of Dante for Beatrice and Petrarca for Laura, but entirely spiritual, literary, artistic. Hence the term “donna angelo,” the angel woman, an idealized creature, around whom the poets developed their poetry.

Vittorio Emanuele II, first king of Italy, was a burly man with large mustaches, that had very little, at least in the way he behaved, of a monarch. It wasn’t a case state man Massimo D’Azeglio used to tell the story the real heir to the throne of Sardinia (and then Italy) had died in a fire and was subsequently substituted with the son of a butcher, our Vittorio Emanuele, that is.

There isn’t anything historical in D’Azeglio’s tale, yet, Vittorio Emanuele, in his heyday, was better known for his passion for hunting in the Alps and his love for women than his aristocratic aplomb. He had a penchant for speaking Piedmontese also at court, switching to French only in official occasions. Italian? He never spoke it fluently. And it was Piedmontese he would use when talking about hunting trips and other manly affairs with commoners, in the long rawdy evenings he loved to spend in local taverns.

This was our first king, who wasn’t king of Italy yet when he met Rosa Vercellana, in 1847. She was a teenager, he a young man of 27. They hit it off immediately, even though Vittorio Emanuele was already married with the future queen of Italy Maria Adelaide. What was thought to be just another affair, turned into one of the best remembered love stories in the history of Italy.

Rosa conquered Vittorio Emanuele with her simplicity and her love for the outdoors and country life: she made him feel like the man he wanted to be, rather than the king he may have not really aspired to become. There was no doubt in the eye of people that the couple loved each other, not even in those of Maria Adelaide who, as the perfect queen, never reproached her husband for the affair. When she died, in 1855, state interests called for Vittorio Emanuele to marry again and create political bonds with another European royal family, but he refused: he wanted to stay with his Rosina. By then, the couple had two children, and Rosina was gifted the title of countess of Mirafiori and Fontanafredda, which they inherited. Eventually, the couple married, but it was a morganatic union, that is, neither her nor her children were to inherit any of the Savoias’ titles or possessions: in other words, she wasn’t a queen and her children were not considered potential heirs to the trone.

Rosina accepted it all for love. When her Vittorio Emanuele died, she would send flowers to his grave, in the Pantheon in Rome, anonymously. When her time came, too, she was buried in Mirafiori, where she had lived and loved her king the most. 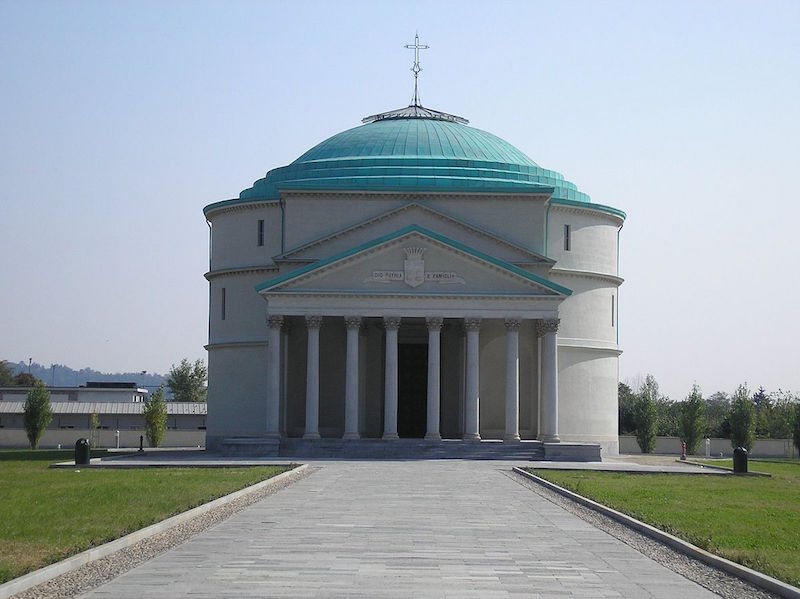 Love to the end: Claretta Petacci and Benito Mussolini

Benito Mussolini loved women and was known to be a latin lover. Certainly, his wife Rachele – a no-nonsense country woman from Romagna, just like him, who gave him 5 children – had some patience. Legends say he would have four different women everyday and that he had a penchant for those who were already married.

We don’t really know how many shared his bed, but some names passed to history: first among them all, Ida Dalser, from whom he had a son (and whom he probably married, too), Leda Rafanelli Polli, writer and painter, Angela Curti Cacciati and journalist and art critic Margherita Sarfatti. However, one name remains etched in the memory of all Italians, that of Claretta Petacci. Born in 1912 in a wealthy Roman family, her father was the private physician of Pope Pius XI. Small and curvaceous, Petacci was 20 years old and married with Riccardo Federici, lieutenant of the Italian Air Force when her liaison with Mussolini started. The two eventually separated in 1936. Claretta sought Mussolini with determination: he had just ended his long relationship with Sarfatti, but her gentle insistence and beauty made the trick and the two became inseparable.

Petacci‘s love for her “Ben” was real: she accepted to remain a mistress and never asked him to leave his wife, to whom he was attached and, in his own way, respected. Donna Rachele was an important figure in Mussolini‘s life, a woman he certainly cherished, in spite of the continuous, relentless cheating. Up to 1943, Claretta‘s role could well be considered glamorous: she was, in the end, the most envied woman in Italy, but things turned for the worst after the fall of the Fascist Régime. She was arrested on the 25th of July 1943 and released only on the 8th of September, when the Armistice was signed. From then on, she remained always with her man, until the very end, on the 27th of April 1945, when the couple was arrested by a partisan commando while on their way to Switzerland, a last attempt to flee the country and save their lives. When given the possibility to leave, she refused adamantly, in spite of knowing what was about to happen to her. The following day, she was shot dead with Mussolini, her corpse hung head down with that of her lover in Piazzale Loreto, in Milan.

Mussolini may have been the wrong man, but Claretta showed her love was sincere and, indeed, endless.

Paolo and Francesca, Dante and Beatrice, Petrarca and Laura, love stories where reality mingles with poetry. But also Rosa Vercellana, “la Bella Rosina” and Vittorio Emanuele II, and Benito Mussolini and Claretta Petacci, relationships where history and life play havoc with love, often with tragic consequences. In all their differences, these love stories have the same common trait: they entered Italy’s common imagination.