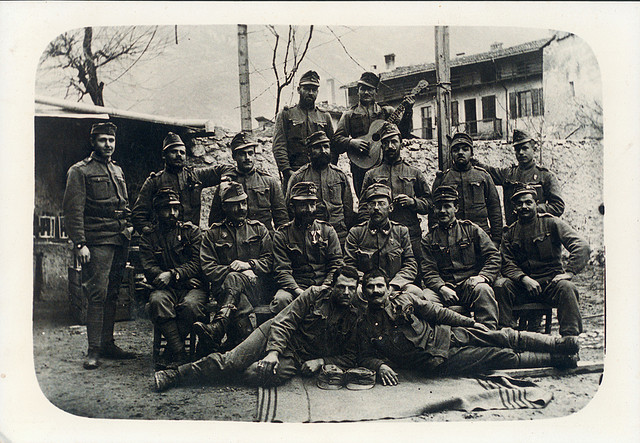 One Hundred Years of Remembrance

On May 24 2015, Italy celebrated the 100th anniversary of its entry into World War One. Many, even if aware of its bloodiness and of the tragedy it brought to the entire world, fail to understand its true magnitude: we are, often, more aware of how horrific, how unconceivably violent World War Two was, yet we seem not to perceive World War One’s horror with the same intensity.

Truth is, World War One was, if differently, just as tragic. It changed, destroyed, ripped apart the lives of millions, just as World War Two did. It is important, it is almost a duty, in many a sense, not to forget it, especially now: none of the men who fought it are still alive, none of those who lived and witnessed the fear and tragedy of it can tell their stories.

However, their experience and their tales can still be passed on by us, remembered and kept actual.

When you are in Primary and Middle school in Italy, you are often asked to learn famous poems by heart. One of them is San Martino del Carso, by hermetist poet Giuseppe Ungaretti, who fought in the trenches as a teenager. This is his memory of war, of what it left within him. In their simplicity, Ungaretti’s words became the symbol of Italy’s effort in the Great War and, more even than that, of the trail of loss, turmoil and pain its events left within the people who fought it:

who were closed to me

But in my heart

not one cross is missing.

It is my heart,

the most ravaged of all villages.

The history of World War One

The period from 1915 to 1940 in Italy is tied, directly and indirectly, to the events of the First World War and its consequences, which were to lead to the Second World War.

The Italian effort in the first world conflict is strongly associated to the Eastern Front, which ran through the Dolomites, where the armies of Italy and Austria-Hungary faced each other from 1915 to 1918.

In 1882, Italy had joined the Triple Alliance, along with the Empires of central Europe (namely Prussia and the Habsburg’s Empire) in hope of getting a few territories including Dalmatia, Trieste and Istria. In 1914, when the conflict started, Italy was still nominally allied with the Alliance. However, when the country finally decided to enter the war actively, it sided with their opponents, France and Britain, which had promised territorial acquisitions to the Italian king, Vittorio Emanuele III, in case of victory.

Even though Italy had initially hoped to launch a surprise attack to capture many cities in Austria, these hopes were quickly dashed. In the end, the country had to resort to trench warfare, as it was common already on the Western Front.

As said, Italy had initially opted for neutrality, in spite of its diplomatic ties with the central Empires. Italy managed to maintain neutrality because it claimed to have joined the Triple Alliance exclusively for defensive purposes: because war had been waged by the Alliance, Italy felt it was in its right not to enter the conflict actively. Italy had had a heated rivalry with Austria-Hungary since 1815, when, after the end of the Napoleonic wars, a new european asset had been constructed at the Vienna Congress. It was then that Italy (which was not a unified country, yet) lost several regions (modern Trentino Alto Adige and parts of modern Friuli Venezia Giulia) to Austria-Hungary.

Aware of this situation, the forces of the Triple Entente (France, Great Britain and Russia), tried to woo Italy to join the war on their side. Hostic at the beginning, Italy eventually agreed with the London Treaty of 1915 in exchange, as we said, of the possibility of territorial annexions in case of victory.

Italy then cut off its alliance with Germany and Austria-Hungary and officially entered the First World War on the 24th  of May 1915, beside the Triple Entente.

When Italy entered the World War, it started with an attack aimed at conquering Gorizia, strategically located along the Isonzo river. However, things did not go as planned. The Italian army was far from being ready to join the conflict (a logistic mistake that was to be repeated in 1940), as it lacked proper – and sufficient – ammunition, vehicles and artillery: for instance, it barely counted 600 army vehicles, which meant troops could count only on horses and mules for the transport of weapons and supplies. In insight, this proved to be a huge setback.

Luigi Cadorna was put in charge of the troops in spite of having very little battle experience on his shoulders, which made him unpopular among soldiers: if troops do not trust their leader, victory is an almost unconceivable dream to attain.

In August, 1916, the Italians were still stuck on the river Isonzo and launched their 6th attack in the area to obtain highly relevant strategic positions; even though this last attack proved to be relatively more successful than the others, Gorizia was still unconquered. When, eventually, the city was taken, Italian troops obtained a much needed injection of courage and strenght, which however failed to produce further success: for the first two years of the war, Italy largely fought a “guerra di posizione“, a position war, where lines where guarded and defended, but no advancement was made. This type of war, which is commonly known also as “trench war” because soldiers fought, lived and died in trenches, is today quintessentially tied to the events of World War One.

If life in the trenches was horrific both on the Western and the Eastern Fronts, the latter (where Italy fought) proved to be harder under certain circumstances: attacks were launched more often and discipline in the Italian army was known to be particularly harsh.

“La leggenda del Piave”, a song of the WWI

After the tenth Italian attack in the Isonzo area, nothing much had been gained. Italy then directed an attack on Austria to the east and north of Gorizia. The Italian army managed to break the lines and captured the Bainsizza plateau. Just when the Italians thought that they were one sure step closer to victory, they experienced another drawback: the supply lines were not able to keep up and Italy was forced to withdraw.

Shortly before the 11th battle on the Isonzo was fought, the German Army provided reinforcements to the Austrian’s. The Austrians were desperately in need of help by this time and German soldiers rushed to their help. They introduced various tactics and war strategies unknown to Imperial soldiers, which could have potentially helped the Alliance to obtain some victories. However, soldiers had been engaged in several attacks back to back and were left with almost no energy, which resulted, once again, in no territorial gains.

In 1917, the Germans and the Austrians launched an attack on Caporetto with a large supply of artillery. The armies easily penetrated the Italo-austrian border and, on the very first day, they managed to pierce into Italian territory for 12 miles to reach the Tagliamento river. This battle is remembered in Italy as one of the most tragic war events for the nation, to the point it even entered common language: if something is “una Caporetto“, it means it is a defeat or a failure of epic, catastrophic proportions.

The End of the War

1918 marked the end of the war and, for Italy, it was the year of two of the most relevant World War One battles, that of the River Piave and that of Vittorio Veneto.

The Battle of the Piave began with an attack close to the Tonale Pass, which the Italian armies easily repulsed. The Italians were able to move two battalions in the direct path of the Austrians in an attempt to block them. Svetozar Boroevic Von Bojna, leader of the Hungary-Austrian army held the lines with strength, but its supply lines had been bombed, whereas Italian reinforcements soon arrived in the area, tipping the scale in their favor.

No more offensives were launched after the Battle of the Piave. The army of Italy had suffered considerable losses, and thought launching an attack at that point quite dangerous. Armando Diaz, who had been the general at that time, decided to wait for more reinforcements from the Western Front: when they finally arrived, in October of 1918, the Italian army was in the position to launch one last attack.

Vittorio Veneto, located close to the Piave river, had been the target of it: the Austrian armies had fought quite fiercely, but Italians successfully overwhelmed them. On the 3rd of November, that same year, Austria surrendered. The following day, the armistice was signed.