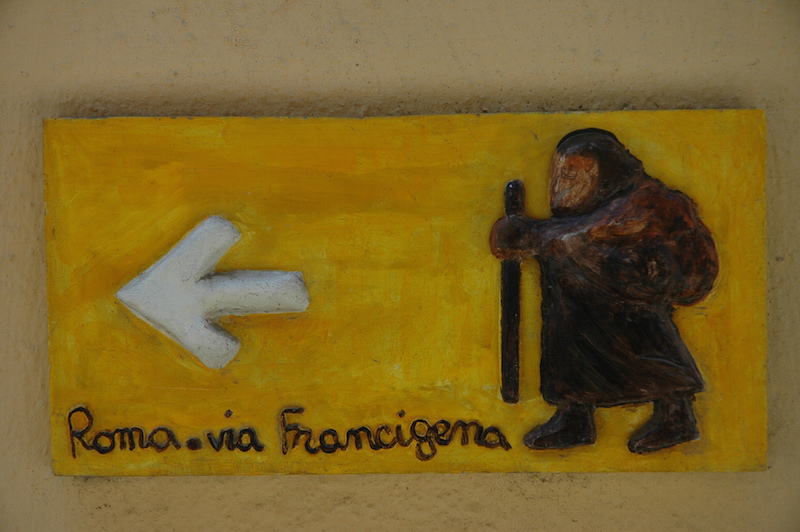 ( Continues from Via Francigena )

Once pilgrims leave the Via Francigena and enter the city of Rome, there are traditionally seven churches that have been designated Pilgrim Churches. The two most important of these Pilgrim Churches are Saint Paul Outside the Walls and of course, Saint Peter’s Basilica in the Vatican. Praying at the tomb of Peter, the Rock upon which Jesus built his Church is second only perhaps to praying in the Church of the Holy Sepulcher itself. The importance of praying before the tomb of Saint Paul has never been lost on pilgrims to Rome, without him the message of Jesus may never have reached the Gentiles with such success.

Besides visiting the resting places of the pillars of Christianity, pilgrims to Rome also make stops at the other major and minor basilicas of Rome. While pilgrims are welcome at any time, pilgrimages to these churches during a Jubilee year will grant the pilgrim a special indulgence for the remission of sin. Below are the four major and three minor basilicas that make up the seven Pilgrim Churches of Rome. Of course, pilgrims should also visit the other important churches and pilgrimage sites in Rome such as the Colosseum, the scene of countless early Christian martyrdoms.

There is no mistaking the massive dome and colonnaded square of Saint Peter’s Basilica, the largest and arguably the most famous church in the world. The church rests upon the foundations of Old Saint Peter’s, built by the Emperor Constantine over the traditional site of the veneration of Saint Peter. By the fifteen century, the old church was on the verge of collapse and so was replaced by the masterpiece seen today. Even though numerous popes, blessed individuals and saints are buried in Saint Peter’s Basilica, most pilgrims both in the past as well as today come to the church to venerate the “Prince of the Apostles”, Saint Peter. A famous and possibly ancient statue of Saint Peter within the church has had one foot rubbed completely smooth from centuries of pilgrims touching and kissing the statue before praying at his tomb. Directly under Michelangelo’s dome and beneath the elaborate Baldachin of Bernini lies the tomb of Saint Peter, the ultimate destination of pilgrims to Rome. Modern pilgrims who plan ahead may have the chance to get even closer to Peter by taking a Scavi tour of the ancient necropolis that still lies below the Papal crypt of the Basilica.

Ravaged by fire, floods and earthquakes, the Basilica dedicated to Saint Paul still retains its ancient layout. The Basilica, enlarged and greatly rebuilt over the centuries, was built on the site of a former graveyard outside the walls of Rome where the martyred Saint Paul was buried. Much like the tomb of Saint Peter, Paul’s grave was also a pilgrimage location marked by centuries of veneration before there even was a church built. Today, the Benedictine monks of San Paolo fuori le Mura offer services and confessions for pilgrims wishing to venerate Saint Paul and their abbey at the Basilica has a wonderful cloister for contemplation. After a long and turbulent history in which most of the ancient church has been rebuilt, the actual location of Saint Paul was lost somewhere underneath the main altar. At the request of recent pilgrims, excavations by Vatican archaeologists have been done at San Paolo fuori le Mura in order to make the relics of Saint Paul more accessible to the faithful.

This is the site of the first church allowed by Constantine and is still considered the “Mother Church” of Roman Catholicism. San Giovanni in Laterano is the Cathedral of Rome and therefore the Church of Rome’s Bishop, the Pope. The church has been sacked by barbarians, suffered through earthquakes and completely rebuilt after fire but has never lost its importance to pilgrims. Although San Pietro in Vaticano has become more important in recent times, many of the Catholic Church’s most important events took place here and the Lateran Palace was the official Papal residence for centuries. San Giovanni in Laterano and the surrounding area is home to very important relics including the heads of Saints Peter and Paul housed in the elaborate gothic baldachin of the high altar. The high altar is also said to contain a portion of a table used in masses held by Saint Peter himself. Across the street are the remains of the original Papal palace which houses both the Scala Santa or Holy Stairs and the Sancta Sanctorum, a series of chapels known for having many holy relics including the Salvatore Acheiropoieton, an icon of Christ supposedly painted by Saint Luke the Evangelist.

The Basilica of Santa Maria Maggiore is the oldest church in Western Europe dedicated to the Virgin Mary. The church was built in the 5th century on the site of a miraculous snowfall in the height of Roman summer. Unlike the other ancient basilicas of Rome, Santa Maria Maggiore has not been completely rebuilt and a large amount of the ancient church survives including original mosaics. The church is the final resting place of Saint Jerome, translator of the Vulgate and houses relics belonging to the Apostle Matthias. Under the high altar lies the Bethlehem Crypt and the relic of the Holy Crib, pieces of wood from the manger of Jesus. Santa Maria Maggiore also houses the Marian icon known as the Salus Populi Romani, another holy image that may have been originally painted by Saint Luke. The image, located in the Borghese Chapel, has been the object of veneration for pilgrims, popes, saints and especially the citizens of Rome.

In the year 258 Lawrence, a Deacon of Rome was burned to death on the future site of this basilica. The present structure is actually two churches that were combined in the Middle Ages, giving the basilica a slightly uneven floor plan. During World War II San Lorenzo was heavily damaged from bombing and has since been faithfully restored although most of the facade decoration was lost. The church is the final resting place of at least three saints: Saint Lawrence, Pope Saint Hilarius and Christian proto-martyr Saint Stephen are buried below the high altar. San Lorenzo fuori le Mura also holds a blood-stained stone, where the body of Saint Lawrence was placed before burial.

This Basilica is one of the most historically important of the Christian pilgrim sites in Rome. The catacombs under the church were once the temporary resting places of many early Christian martyrs, including Saints Peter and Paul during the Roman persecutions. It was during the time that these saints were interred here that the site became popular with pilgrims, and known for its miracles. The church’s namesake, Saint Sebastian, was a Roman soldier ordered to death by arrows, a very popular subject for Medieval and Renaissance artists. Nothing remains of the ancient structure, pillaged by the Saracen invasion of the 9th century, save for the catacombs below. The saint’s body is buried under the altar in his chapel while the Chapel of the Relics houses other holy objects including one of the arrows that pierced Saint Sebastian during his martyrdom.

Basilica of the Holy Cross – Santa Croce in Gerusalemme

Saint Helena, the mother of Emperor Constantine, built this Basilica in the imperial Sessorian palace to house the relics she brought back from the Holy Land. These relics include nails from the Crucifixion, two thorns from the Crown of Thorns, small fragments of the True Cross, and the Titulus Crucis, or headboard of the Crucifixion. These relics were once housed in Saint Helena’s personal chapel, but since the church has undergone several redesigns over the centuries the Relics of the Passion are now housed in the Sanctuary of the Cross. Besides these important relics Santa Croce also houses a finger of the Apostle Thomas.

For more information on the Titulus Crucis relic of Santa Croce: http://www.lifeinitaly.com/religion/mysterious-relics.asp

This church, the most recent of the Pilgrim Churches of Rome, was added by Pope John Paul II for the 2000 Jubilee celebration. The Sanctuary houses a Medieval fresco of the Virgin Mary that has performed documented miracles since the 18th century. Although the building is very recent, the image of the Virgin has been venerated by the Popes and citizens of Rome for a long time. The new shrine was built in order to give thanks to Mary for her intercession during the dark days of World War II. Pope Pius XII credited the venerated image for saving Rome from destruction in 1944. Since the year 2000 the Sanctuary has officially replaced San Sebastiano fuori le Mura as the seventh Pilgrim Church of Rome, however most pilgrims have simply added the Santuario della Madonna del Divino Amore to their itinerary. Pilgrims to the Santuario della Madonna del Divino Amore should look into the night pilgrimages that are held from Easter to October.