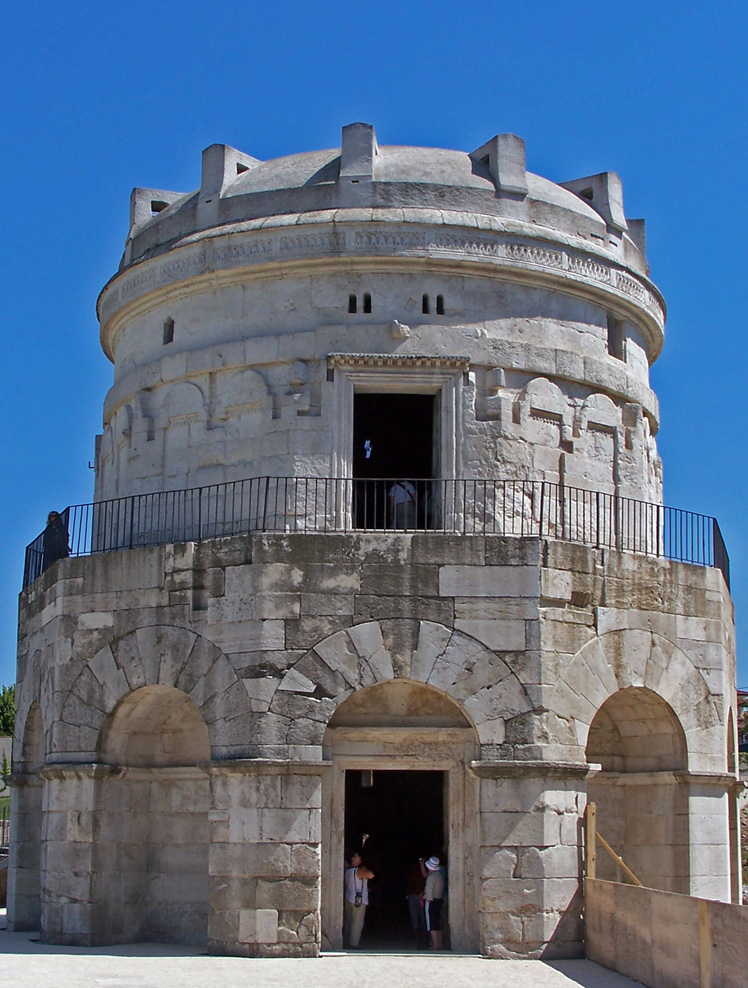 The Western Roman Empire was in deep disarray by the 5th century AD. The last centuries of the Western Empire encompass what is known as Late Antiquity, but the later centuries after the fall of Rome are often known as the Dark Ages. The ways of the Roman Empire would continue in the East, but Italy would now be occupied by barbarian tribes like the Goths and the Lombards.

Alaric I of the Goths famously sacked Rome in 410: the city would never fully recover from the shameful act. Romulus Augustus, also known as Augustulus, was the last Roman Emperor in the West and was deposed in 476 by Germanic general Odoacer. Odoacer actually was already ruling Italy, with Romulus Augustulus acting as a puppet Emperor and, later, by himself for more than seventeen years under the title of rex gentium, the king of the people.

Thoedoric the Great became king of  the Ostrogoths on February 25, 493 after defeating Odoacer. Theodoric’s reign was very much a continuation of the old Roman ways, both because Theodoric had embraced Roman culture and habits, and because most of the bureacratic and institutional staff at court was of Roman extraction.

Theodoric’s time saw many improvements taking place: infrastructures were improved, frontiers were expanded and secured, the economy strenghtened. However, this period of prosperity did not last much longer than Theodoric himself, as weaker Goth rulers followed.

The beginning of the 6th century witnessed a come back of the Eastern Roman Empire, as the Emperor Justinian, the last Emperor of Roman lineage and education, sought to regain the lost lands in the West. From Constantinople, Justinian sent his generals, Narses and Belisarius, to conquer Italy. They succeeded in destroying the Kingdom of the Ostrogoths in 552, after years of fighting. The Gothic Wars, as these events are historically known, have been a true scurge for the people of Italy and their land: famine, violence, epidemies all ensued the battle and it was to take centuries to the country to resurrect from such destruction.

Also because of such a gruesome situation, the level of urbanisation in Italy diminished in the Dark Ages: towns did not completely vanish, but were significantly smaller and much more primitive compared to the Late Roman times. Italy as a whole became more rural, agriculture returning to be the main occupation for most of local population.

After the Gothic Wars, Byzantine forces were not strong enough to defend the country against a new wave of invasions from the Lombards. The Lombards quickly carved out a kingdom for themselves, their rulers wearing the famous Iron Crown of Lombardy. Byzantine possessions were reduced to the coastal areas of the country, most famously the Exarchate of Ravenna, while the Lombards would eventually spread even to Southern Italy.

In the wake of all this destruction and uncertainty, it was the Church to step in and take greater authority over the country. Not only did the Catholic Church hold spiritual power, but the need for learned men for administration ensured a greater temporal power as well. The Bishop of Rome, the Pope, became a ruler in his own right, especially once the Byzantine Emperor’s forces could no longer protect Italy from new threats.

By the middle of the eighth century, the Lombards had taken over Byzantine Ravenna and the Pope was in need of protection. The Lombards were a threat to the Pope, since many of them were still pagan and the majority of Christian Lombards were Arians, hence considered heretics. The Church looked for help and found it in another Germanic tribe known as the Franks, who were fervent Catholic Christians. The Pope bestowed upon the Carolingians (one of the main Frankish families) the spiritual authority to overthrow the Merovingians (who were ruling the Franks at the time)  in exchange for protection from the Lombards.

After defeating the Lombards in 756, the Frankish King Pepin promulgated the Donation of Pepin, which created the Church-ruled kingdom of the Papal State. The new Papal State separated what was left of the Italian Lombard lands in the North and South.

In 774, the Frankish ruler Charlemagne got support from the Pope to invade Italy and annex the Lombard lands of Northern Italy. Shortly after this, Charlemagne was crowned as the first Holy Roman Emperor, on December 25th, 800 by the Pope. However,  this caused a problem with the Byzantines, who still considered themselves as the real heirs of Imperial Rome and still had possesions in Southern Italy. A brief war was settled in 812 with the Byzantines acknowledging the Holy Roman Empire, as long as Byzantines lands in Italy remain uncontested.

Under the rule of Charlemagne, Northern Italy knew years of relative peace and rebirth, a period in fact known as the Carolingian Renaissance. As major military and political events were taking place on the fringes of the Empire, Italy was able to recuperate from previous centuries of invasion and strife. However, the South had been already experiencing the menacing raids of the Arabs and the golden age of Charlemagne was not to survive the his death.

Issues for the Holy Roman Empire began after the death of Charlemagne, in 814, but especially during the years his son’s ruling. Louis the Pious began a decades long diatribe with his sons over the ruling of the Empire, which was to end only after his death and the Treaty of Verdun (843), which gave to each of Louis’ children a part of the empire: the Central Frankish realm was ruled by Emperor Lothair I, Northern Italy became the Kingdom of Italy, ruled by Louis II, who became Emperor in 855.

After the creation of the Holy Roman Empire and the Papal State, Southern Italy consisted of the remaining two Lombard territories of Benevento and Spoleto, which accepted Charlemagne’s suverainty only nominally. These Lombard lands would eventually declare de facto independence and start a war between them, until Emperor Louis II imposed his will and separated the entities. The Byzantine Empire still had a few possesions on the coasts, but cities like Naples, Gaeta, Amalfi and Venice were gradually becoming free from Byzantium’s influence. At the same time Amalfi and Venice began to prosper due to an increase in trade, especially salt and silk. Sea trade was revived and Italian merchants were trading with all major Mediterranean ports.

The early years of the 9th century witnessed the conquest of Sicily by Muslim Arabs  known as Aghlabids. The island was a Byzantine possession, but could not be heavily defended. The invaders took Palermo in 831, and eventually occupied the entire island. The Muslim threat, however, was not confined to Sicily: in 846 a Muslim force attacked Rome and even St. Peter’s Basilica was not spared from looting. In response to this attack, Pope Leo IV ordered the construction of the Leonine walls around Vatican City, completed in the year 853. After the Saracens occupied Bari in 852, Emperor Louis II, Adelchis of Benevento and the Byzantines announced a joint operation against the Arabs in Southern Italy, succeeding in recapturing Bari. In a power play for independence,  Adelchis imprisoned Emperor Louis II, all while the Byzantines attempted to make some territorial gains in the region. Gains which were entirely offset by the definitive loss of Sicily in 902.

The thrones of Germany and Italy were united in 951 with the crowning of Otto I as Holy Roman Emperor. Otto I  claimed the union would revive the empire of Charlemagne. The Byzantine Empire created the Catepanate of Italy to administer the newly acquired regions of in the South. The other Italian cities of Southern Italy still remained divided among the Lombard kings, but paid nominal alliance to the Byzantine Emperor.